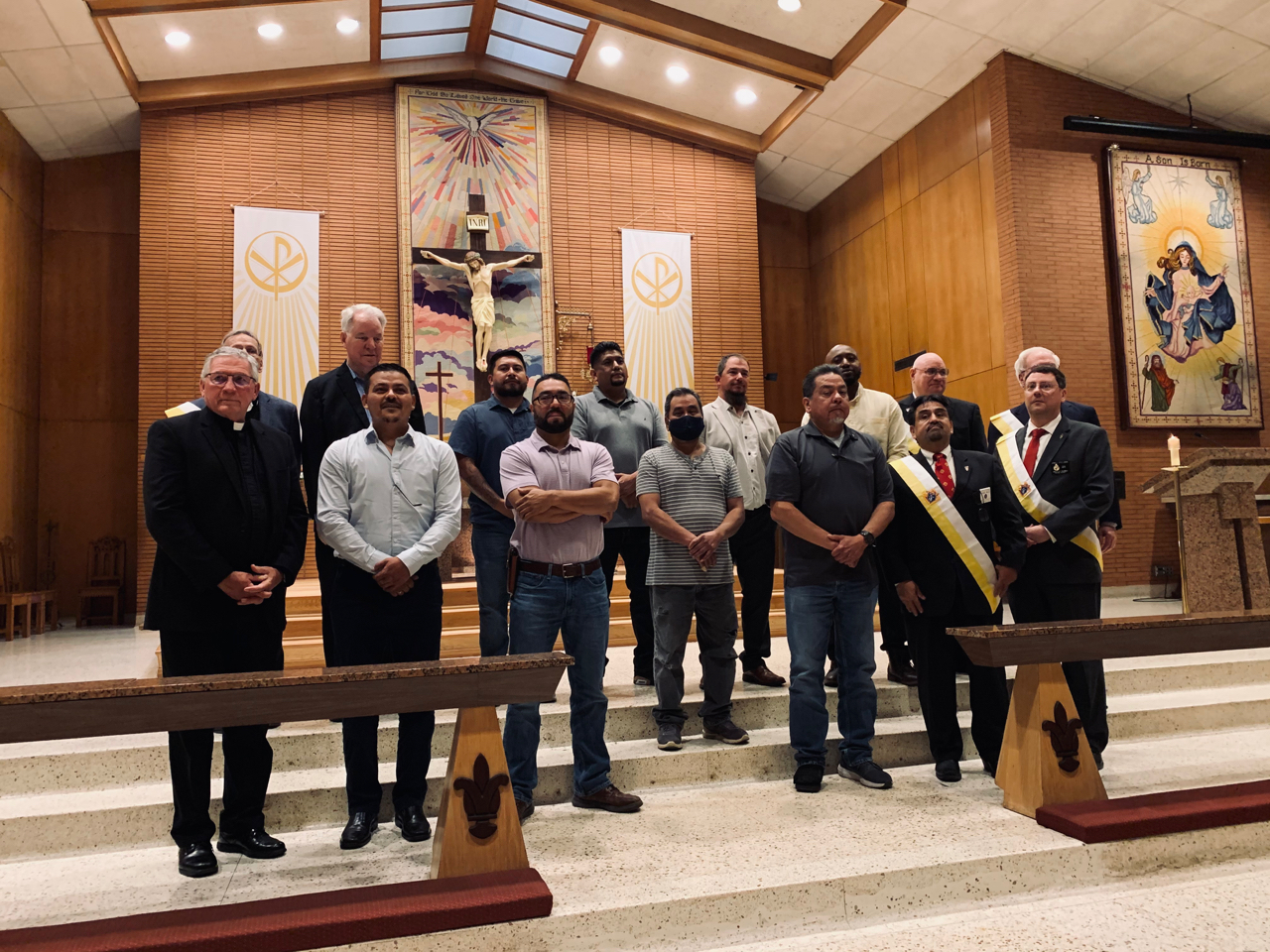 District 109 held its first ever Exemplification ceremony not only since the pandemic was declared, but one that was held district-wide for the first time ever. Our District includes four councils, they are: Holy Spirit Council 8157, Holy Cross Council 7017, St Francis of Assisi Council 12484 and St Elizabeth of Hungary Council 17111. Our District Deputy, SK Kebran Alexander coordinated the effort a few weeks ago and made sure to enlist the support and participation of all the council Grand Knights. Knowing Holy Spirit would be out of commission, so to speak, due to the floor remodeling project underway, our DD secured the use of the sanctuary at St Elizabeth of Hungary and the participation of Fr Russ Mower in the Chaplain role. Our Degree team had been practicing for our first upcoming ceremony which we are planning to hold at the end of June, all details are yet to be determined, but we are ready to go.

At the ceremony our council welcomed two new brother Knights, Edgar Cervantes and Jerry Smith Jr. They were both accompanied by their wives to the ceremony. We also had two 1st degree Knights attend the ceremony so they could advance to 3rd degree, as it is now required by Supreme, if you entered the Order via the old style ceremony. Our new 3rd degree Knights are Gamaliel Hernandez and Dennis Hudson. There were five candidates from the other councils in attendance as well. Congratulations to all brother Knights!

The Exemplification Team, assembled just prior to the start of the ceremony by DD Kebran, included Field Agent James Speelman (Waxahachie), whom assisted by his son, took charge of the Prepared table with the rosaries and pins and provided copies of the scripts, and he also played the Presiding Officer role. The Chaplain was Fr Russ Mower, pastor of St Elizabeth. The Presenter on Charity was SK Jorge Ruiz, the Presenter on Unity was SK Bill Dover, the Presenter on Fraternity was SK Mike Fitzgerald and SK Russell Gully had the part of the Warden. Our Worthy Dallas Diocesan Deputy Mike Courtney was present to do the honors as the presenter of the rosaries and pins for the candidates.

Also in attendance were our own Financial Secretary Pete Perta, our Exemplification team presenter Ramon Presas and our Membership Director and Assistant Diocesan Deputy, SK Jim Kowalski. We wish to express our sincere gratitude to host Council 17111 and Grand Knight SK Joseph Villegas and his Financial Secretary SK Mike Luna for their hospitality before and after the ceremony. They also very graciously provided the rosaries for our candidates.

The Supreme literature says this ceremony was designed for a church setting with a large audience and the team should pay particular attention to how the performance is perceived by, and its impact upon, candidates and all in attendance. The literature also suggests presenting from memory is ideal but team members may read the script, as long as they are comfortable and can do so skillfully. It also recommends that the ceremony be conducted with some theatrical flair and passion. Based on the outpouring of support and positive feedback we received from several audience members, I would say our mission was accomplished.