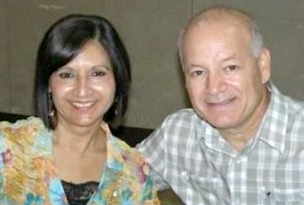 The Knights of Columbus tenet of devotion to family is rarely more evident than in the Ybarra home in Waxahachie. For the past seven years, David and Veronica have been tending to her elderly parents, who previously were living in El Paso. Veronica’s father is now 107, her mother 109. It’s a labor of love that requires a huge time commitment from David and Veronica. “It feels really good,” David said. He and Veronica have been married 40 years. They met in El Paso, where she grew up and where he moved to from Chicago when he was a youngster. David retired three years ago from a career that finished with time as a warehouse manager. Veronica is also retired; she worked at the V.A. hospital in Dallas in the dental department. They became Holy Spirit parishioners in 2003. David joined the council in 2008, soon after added his major degrees and Fourth Degree and was serving as our chancellor when he stepped away to help care for his in-laws.