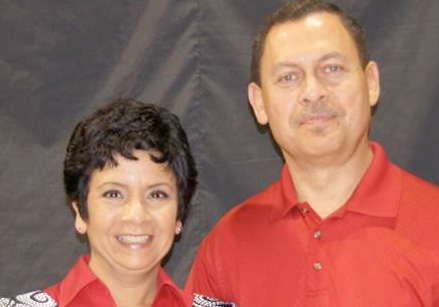 Parishioners since 2000, John and Bonnie are involved in a slew of Holy Spirit ministries and related organizations. John joined the Knights in March 2012 taking all three degrees at once and has been nominated to become Warden among the slate of 2014-15 officers. Just recently, he helped out at most of the Lenten fish fries (not to mention embarrassing a number of us afterward on the basketball court playing H-O-R-S-E). He is the captain of the council’s Cedar Hill baseball concession Saturday morning team. During the just-completed Faith Formation year, he was part of the traffic control detail that is quietly so important to our youngest parishioners. Bonnie is likewise a member of the Catholic Daughters of the Americas, about to become the Financial Secretary. She attended Holy Spirit’s most recent ACTS retreat for women in February and also participates in RCIA. John recently celebrated his 26th anniversary working for Kenworth Trucking. John is from Louisiana and the little town of Mamou (the “Cajun Music Capital of the World”) in Evangeline Parish and came to Texas when he was 18. Bonnie is from El Paso by way of Austin. They have three grown children (Daniel 33, Johnny 31 and Jenny 29) and one grandchild (Jenny’s Jeremiah, who is 7).