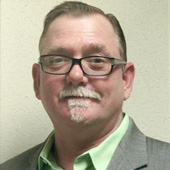 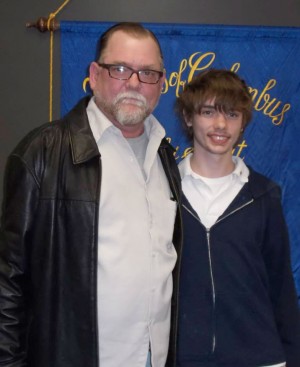 When I asked Chris where he came from he said “I’m as local as you can get”. Born and raised in Oak Cliff, educated with a degree in Fine Arts from Mountain View College, and owner/ operator of Beacon Signs in Duncanville, Chris is indeed local. Cecelia, his wife, was a Catholic “but she never pressured me to convert” but said “we’re going to raise the kids – Trevor and Sophie – Catholic”. So Chris went to church with Cecelia and family for 4 years when he realized something was missing and so began RICA classes to become a Catholic. While attending RICA classes “I noticed Knights doing stuff’ he said and so he approached the Knights, particularly Chris Kubin who was Deputy Grand Knight at the time, to “find a way to serve”. Chris joined the Knights immediately after completion of RICA training and three years later was Grand Knight and he held that position from July 2008 thru June 2010. During his tenure as Grand Knight “we stopped the open hand policy” and substituted a budgeted approach to spending. We “brought in younger new members”. Indeed, because of new membership and other good works, the Council was awarded Star Council in his first year as Grand Knight. “I am most proud of introducing The Knights of Columbus into the community by bringing BBQ cook-outs to the firemen and police officers of Duncanville, DeSoto and Cedar Hill”. During his time, the traditional Christmas Party was abandoned for a Breakfast with St Nick and an appreciation dinner for Knights in January. The appreciation dinner “has been one of the best events to celebrate the activities and hard work for the last year”. David Briggs and Allen Reitmeier were Knights of the year during his tenure. Marty Butler left this world while Chris was Grand Knight. Chris summed up his philosophy by saying “I never joined the Knights to win an award. My trophies are the smiles on the faces of the people we serve and help, not the plaques. I was very proud of my two year reign”.