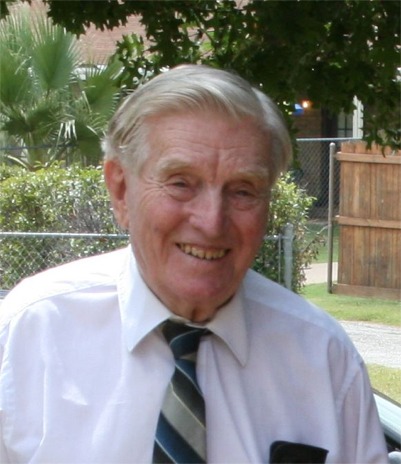 Loyd William McCaskill, known to most as “Bill”, went to be with the Lord on April 3, 2013.  Bill is the father of Denise Zehnder and father in law of Steve Zehnder.  He was married to Eleanor for 64 years.  Words most often used to describe him are jolly, gentle, honest, tough and a practical joker.  He ALWAYS smiled and NEVER complained even in the most challenging of times.

Bill is most often thought of as a lover of nature.  He was most comfortable sitting on his back porch with binoculars perched on his eyes to look at songbirds or hummingbirds making their home.  During the warm summer nights, Bill would point his telescope towards the most brilliant of stars so that his children and grandchildren would see the wonder of the night’s sky.  Every kid in the family has some memory of lying in the grass or on a hammock with him, watching a meteor shower.  At 3:30 a.m. one cold winter morning Bill wrapped all of his kids in blankets and took them outside to see a meteor shower they would never forget.

Annually, Bill and his family went on vacation to his favorite place – the Gulf Coast.  If asked, Bill would most certainly tell you there is no better place on earth than the beach.  Fishing, sand crab hunting and swimming to the sandbars were among some of his favorite activities.  Long after retirement, Bill continued to swim in the warm waves of the Gulf searching for sand dollars.  All of his children and grandchildren, and now great grandchildren, see the ocean through his eyes and know it is a special place.

Bill was a skilled dry cleaner. He along with his brother, Milton owned and operated Alamo Laundry and Dry Cleaners on the corner of Jefferson and Bishop….the area where Bishop Arts District is today.  He could fix anything and if it was broken he fixed it.  As a dry cleaner, Bill used naphtha to clean many things.  It could be used to clean certain paints and markers out of clothes.  And…. if you used a little too much to start a fire in the fireplace it would melt the decorations right off the mantle – just ask Eleanor.  Speaking of the fireplace, the children of Bill remember many a morning their dad would have a crackling fire in the fireplace when they woke to ready themselves for school.  And he never forgot to kiss each one goodbye, as he knew these were special times.

Bill was our rock, our hero, our comforter and best friend.  We are better people for having know him and will never forget him.  More than anything, he was a Godly man, grounded in his faith and dedicated to his family, friends and wife of 64 years.  We thank him for being such a wonderful example to us all.

We love you Bill, dad and grandpa,

By Denise and Steve Zehnder