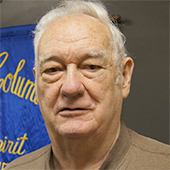 Robert Foster was a beloved husband, father, grandfather, and great grandfather. Robert passed away at the age of 84, on September 23, 2017. He was born in Waterbury, CT, on January 23, 1933, to Donald W. Foster and Sylvia M. Whittaker. Bob grew up in Thomaston, CT. and graduated from Thomaston High School in 1952. He served in the US Navy during the Korean War on the USS Shenandoah and was honorably discharged in 1960. Robert married his wife, Jeannine T. Bolduc, of St. Ludger, Canada, on November 30, 1957.

Bob began his long career in the automotive industry, in 1955, for General Motors in Bristol, CT, retiring as Foreman over the Sheet Metal Division in 1987. He served as a Police Officer and Volunteer Fireman in Thomaston, CT. Robert, and wife, Jeannine, relocated to Cedar Hill, TX in 1987, to be closer to immediate family after his retirement. He was actively involved in the community, volunteering his time at the Cedar Hill Food Pantry. Bob was a member of the Holy Spirit Catholic Church community and active member of the Knights of Columbus. He was also a member of the VFW and American Legion. Bob had a passion for horseback riding, golf and bowling.

For those of us that worked with him over the years, he will be remembered as a top notch person who could be relied upon. On Saturday mornings you could bet all your money that he would be at the concession with Ed O’Brien and Frank Hernandez during the first shift. His first task always was to turn the labels on the bottles in the drink cooler so that they could be read by the customers. It was just a “thing” for him.