The Life and Times of Wendell JeanPierre 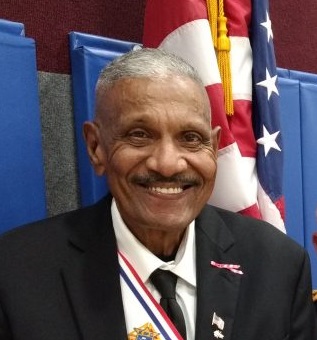 Wendell JeanPierre was born in California; but he never claimed it.  He was raised and educated in New Orleans, and without hurricane Katrina, would have finished his life there.  However, it was here in Texas that Wendall passed away on October 12th, 2022 (about 2am) with his wife Connie at his side, from a massive stroke a few days before.  Wendell has always been an intellectual man having graduated from Saint Augustine High – a famous Catholic High School in New Orleans.  Even today, through the St. Augustine Alumni Association, he and his classmates continue to inspire young men to be men of the world through scholarships and counsel.  After high school Wendell entered the military where he was an Ammo Tech.  That’s a fancy term to describe defusing bombs.  He served in Viet Nam and landed in country on his birthday – Wendell thought that was a good omen.  While he survived his tour and received numerous medals and an honorable discharge, he was granted 100% disability.  After his military career he was educated at Dillard College and then SUNO – Southern University New Orleans.  In 1983 during a chance encounter with a beautiful Creole lady in a supermarket in New Orleans he met Connie.  Connie will tell you they met in the produce department while Wendell said it was the meat department.  What matters is that while they were both checking out at this supermarket, Connie’s hand basket of goods flipped over and spilled onto the floor.  Connie said it was an accident; Wendell claimed it was intentional.  They exchanged business cards (his insurance, hers Executive Director of the YMCA) and the courtship began.  One half hour later “Mr. smooth talker” called and asked if she needed someone to help cook her ribeye steaks.  Nine month later they were married and have been for the past 38 years.  He spent nearly his entire working career as a Duty Board Supervisor for the United States Coast Guard.  He retired in 2005 just about 3 months before hurricane Katrina arrived and deposited 10 feet of water in their home.  They decided, for safety reasons, to seek a home in Texas.  With the help of their nephew –a 30 year Army man- they landed in DeSoto and within 9 month had built their current home.  Wendell was an avid reader and writer.  He knew the bible forward and backward and was well versed in scripture and all the books of the bible.  He utilized this knowledge to teach others about “the way, the light, and the truth”.  He was chaplain of the St. Augustine Alumni Association and Lecturer for the Knights of Columbus.  Wendell was a startling surprise to the Knight of Columbus because of his knowledge of church history and scripture.  He was a perfect fit to be the Lecturer for Council 8157, a post he held until his death.  Our Council had the privilege of his knowledge and counsel during his years as a member of our Council.  He was inducted into the 4th degree of the Knights of Columbus and participated in ceremonial duties.  We never got to hear Wendell play his clarinet but he was a musician and able to play a variety of instruments – the best being the clarinet.  Wendell and Connie have been blessed with three children – Kelly, and her husband John Hyatt (Wendell’s best friend) who live in DeSoto with their son Chaz;  Maceo who lives in New Mexico with sons Maceo and Diego; and Malcolm who lives in Orlando Florida with daughter Unass.  Around the house everyone called him Chef JeanPierre and no one was allowed in his kitchen.  During his short time with the Knights of Columbus, it was obvious that Wendell was not feeling well and yet he always had a happy disposition.  You just couldn’t meet a nicer guy.  We’ll miss him a lot.  Visitation will be from 10am until 10:30am at Holy Spirit Catholic Church on Thursday October 27th with Mass following at 10:30.   Burial will be at 1:00pm at the Dallas Fort Worth National Cemetery after a reception from 11:30am until 12:30pm in the Community Center dining room.