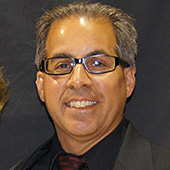 Pete is in his fourth year as our Financial Secretary, having taken the baton from his long-time predecessor, Ernie Coy, in April 2013. Pete moved to the Dallas area in 2010. He joined our council in June 2011 and took his major degrees only a few months later. Pete is a charter member of Tom Greco’s degree team, which began its monthly missions in August 2012. Pete coincidentally serves as the Financial Secretary on the degree team, too. He and wife Bimbo (pronounced BEEM-bo) regularly attend the 5:30 p.m. Mass on Saturdays during which Pete is one of the hospitality ministers. They’re both from upstate New York and big Syracuse University fans. Peter works for Nestle Health Care Nutrition.