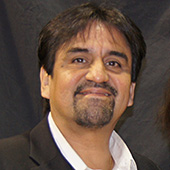 Jorge recently assumed the chairmanship of our awareness committee after jumping in with both feet and hands soon after his entry to the council in 2012. He operates his own graphic design and web business and, before joining the Knights, put those skills on display by helping out with the parish website and providing attractive bulletin fliers for last year’s Fall Festival. Jorge and wife Kathie live in Duncanville and began attending Holy Spirit in 2010. They have three grown sons and came to Texas from New York City in 1981 by a literally circuitous route. They decided in 1980 to take time off and see the country, which they did for three months. They first drove from New York all the way to Key West, Fla., usually staying for a couple of days at each stop and mingling with the locals. Then they drove across to New Orleans, where one of the many friends whom they made along the way suggested they settle in Dallas – which they did, following a brief stop in Texarkana. Jorge emigrated from Ecuador at age 12 and was reunited with his parents and six siblings. He has always been a creative person and graduated from the New York High School of Printing in Manhattan. Kathie is a psychotherapist based in Duncanville.