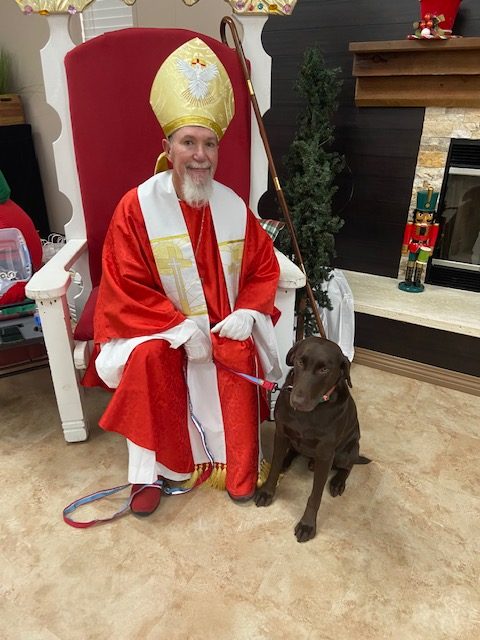 Keith’s already extensive involvement in 8157 activities recently added a new chapter. During Holy Spirit’s Christmas market in early December, he became the latest council member to serve in the role of St. Nicholas during a parish holiday event. (Hats off to Leo Mattingly and Chris Edwards in recent years.) Keith even provided his own costume for the celebration. He posed for photos with about 60 people of all ages, handed out goody bags to the kids (with the help of David Dybala) and gave out St. Nicholas prayer cards to the adults. Keith had proved to be resourceful since joining the Knights in April 2018, later adding his major degree and a Fourth Degree membership. Keith has been a regular participant at the Valley Ridge youth baseball concession stand, helping with snow-cone Fridays during the summer, fish fries, pancake breakfasts and many other doings. He initiated and still oversees the council’s sacramental gifts program. Keith came to Dallas in his 20s from Oklahoma City. He and wife Mary, who often joins him for KC activities, met right here in the parish gym playing volleyball. They live in Dallas.