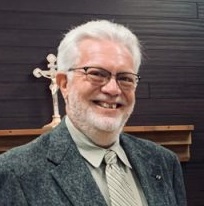 Marc joined our Council in October 2021 and soon made his presence felt by participating in nearly every Knight activity including sponsoring and participating in a Knight Hands project.  His major focus, however, has been on contributing to the success of the ACTS retreat. He has been a “Core Member” of the ACTS Team and has also been a co-director a number of times.  He is passionate about the ACTS Retreat and its benefits to everyone and his words of encouragement at our regular Knight meetings have recruited a number of Knights to participate in the Retreat.  Before becoming a Knight, Marc had been busy in the parish community including helping those in need of food and comfort.  Before he retired, he was a system designer for GateGormet – an airline food service company.  Marc likes to cook outside – a “hangover from Boy Scouts” he says.  Marc and his wife Gilda have been married for 42 years and have a son (Gabe) and a daughter (Marcela).

By: Antonio Liska|Knight of the Month, News & Announcements