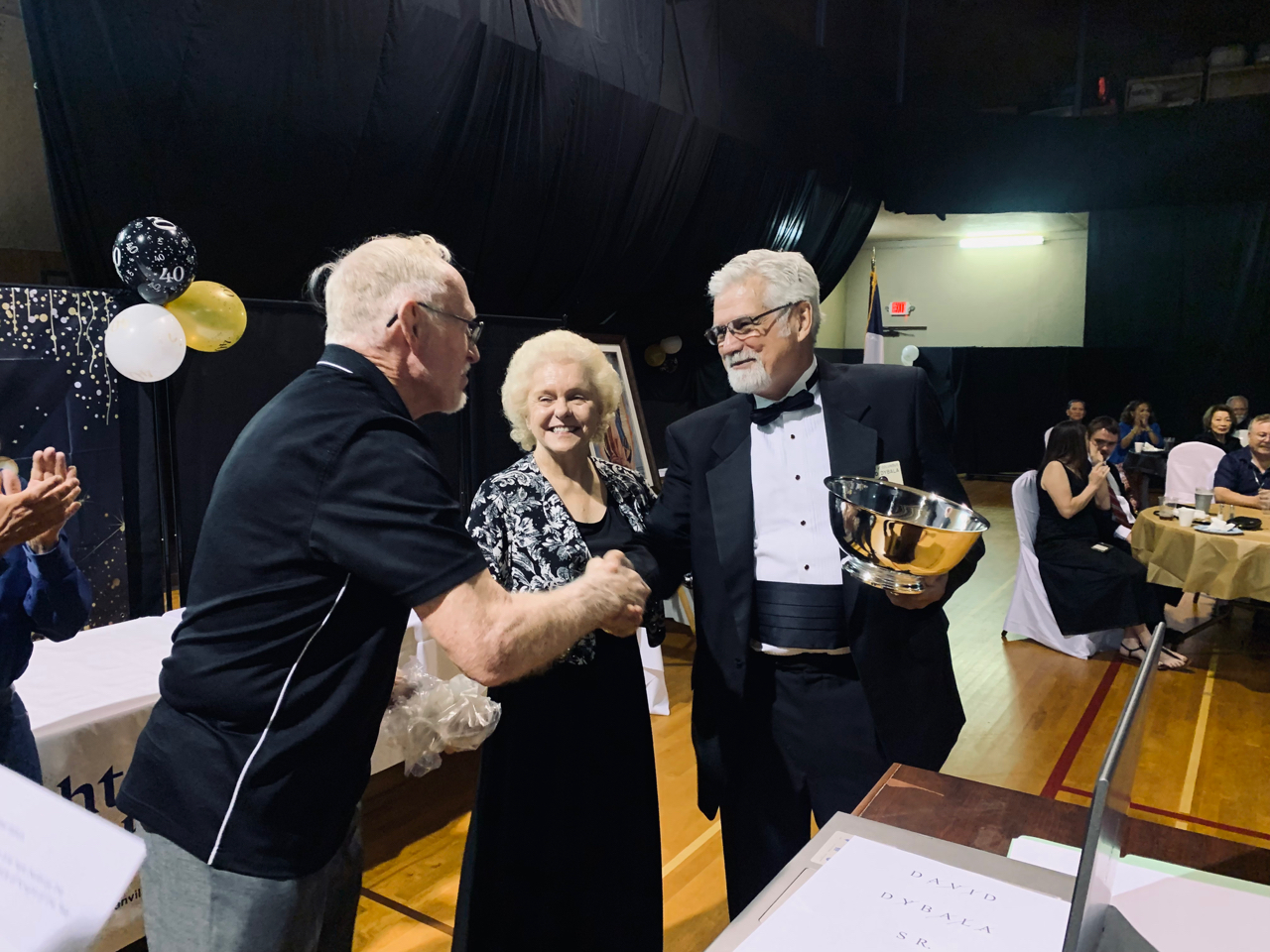 The strong right arm of the church has been holding a ratchet or a power drill this past year at Holy Spirit Catholic Church in Duncanville. David Dybala, a member of Holy Spirit’s Knights of Columbus Council 8157 since 1985, was not only one of the most important parishioners in providing guidance and input during the design phase of the renovation of Holy Spirit’s sanctuary, narthex and classroom floors this past year but also rolled up his sleeves and contributed to the very labor that completed this spectacular job. That happens when you have an engineering degree from Texas A&M and a work ethic like his established early on.

David organized and supervised the working Knights who removed all furnishing from the church, narthex and the nearby classrooms. That included removing all the church pews and storing them so the sanctuary floor could be resurfaced. David’s innovative dolly system design made the moving of the pews a piece of cake. Equally impressive was the task of replacing all the pews after the floor had been resurfaced. Each pew had to be positioned exactly where it had previously been located so that all the tie-down bolts aligned. In total, David organized and supervised approximately 312 man-hours of labor from brothers who through the years have participated in the council’s Knights Hands initiative, which provides volunteer labor to those in need throughout the community.

While David assisted on multiple Knight Hands projects after the church renovation, his next major project was designing and constructing a pedestal for a statue of St. Joseph to be erected in the church’s courtyard. After a concrete base was laid down, the pedestal was constructed using the framework designed and built by David. Then, the 800-pound statue was hoisted up onto the pedestal. And lastly, to complete the scenery around the newly installed statue, David supervised the planting of 13 holly bushes around the courtyard. Without his engineering knowhow, this project would have had to be contracted to an outsider. David was present during all these activities, supervising the 202 man-hours of Knight Hands labor.

It’s said that singing in church is like praying twice. With that, David enjoyed the satisfaction in the role of cantor for Holy Spirit parishioners during the spring and summer months of 2021, though no parishioners were present for Masses that were initially held in the parish’s community center Upper Room. “Certainly you feel it more when you have a congregation that’s joining in,” David said, “but I do it because it’s spiritually uplifting.”

David had been a member of Holy Spirit’s music ministry for years. He recently took on the duties as Council 8157’s director of family activities and has also been instrumental in organizing K.C. members to oversee the hospitality ministry after Holy Spirit Masses were reopened to congregants during the pandemic. All that on top of his frequent involvement in Knight Hands and other council activities including the 2021 Christmas Bazar, assisting at the fish fries every Friday during Lent and organizing and supervising the repair of the rectory after a water leak.

A Texas A&M graduate, David joined the Knights of Columbus in 1980 while in Waco and served as Grand Knight of Council 1358. David supervised the renovation of the parish dining hall into what’s now called The Upper Room. He not only put his engineering skills to good use yet again but also acquired the mural (from Istanbul, Turkey) that now graces the wall above the door leading into the kitchen.

Here are David’s eloquent words describing the work and its results:

“The thing that struck me was, remember the stories about Francis of Assisi hearing the calling and the Lord asking, ‘Rebuild my church.’? The story was he started stone by stone building and then realized that he was being called to do even greater things. But the importance of building the physical church is always there, and I think everyone answered the call. (Many brother Knights were involved.) This is a real opportunity to make a difference for the parish, an opportunity to do something in which we can instill parish pride. That’s why I thought it was important that we name the facility. When we put (the mural) up, when we stepped back, it was as if the room was transformed. Everyone … there was devout silence. It hit me then; this is The Upper Room.”

David spent twenty years of his professional career working as the Director of the Department of Public Works and Transportation for the City of Dallas. David is a soft-spoken leader by example in our council. The respect he has earned over the years is remarkable. When he speaks, people listen. He is one of the bright stars of Council 8157. David has been recognized on multiple occasions over the years as our Knight of the Month. He’s a non-stop contributor not only to the Knights of Columbus but also to the Holy Spirit community.

Last year, David and wife Clara celebrated their 50th anniversary with a trip to Santa Fe that included a stop at the famed Loretto Chapel with its miraculous staircase. The Dybala’s live in Dallas and enjoy two grown children and four grandchildren.

This past Saturday, June 18th at our 40th Anniversary Banquet, David was honored with the Knight of the Year Award for 2021-2022. A well deserved recognition, congratulations David Dybala.

By: Jorge Ruiz|Knight of the Year