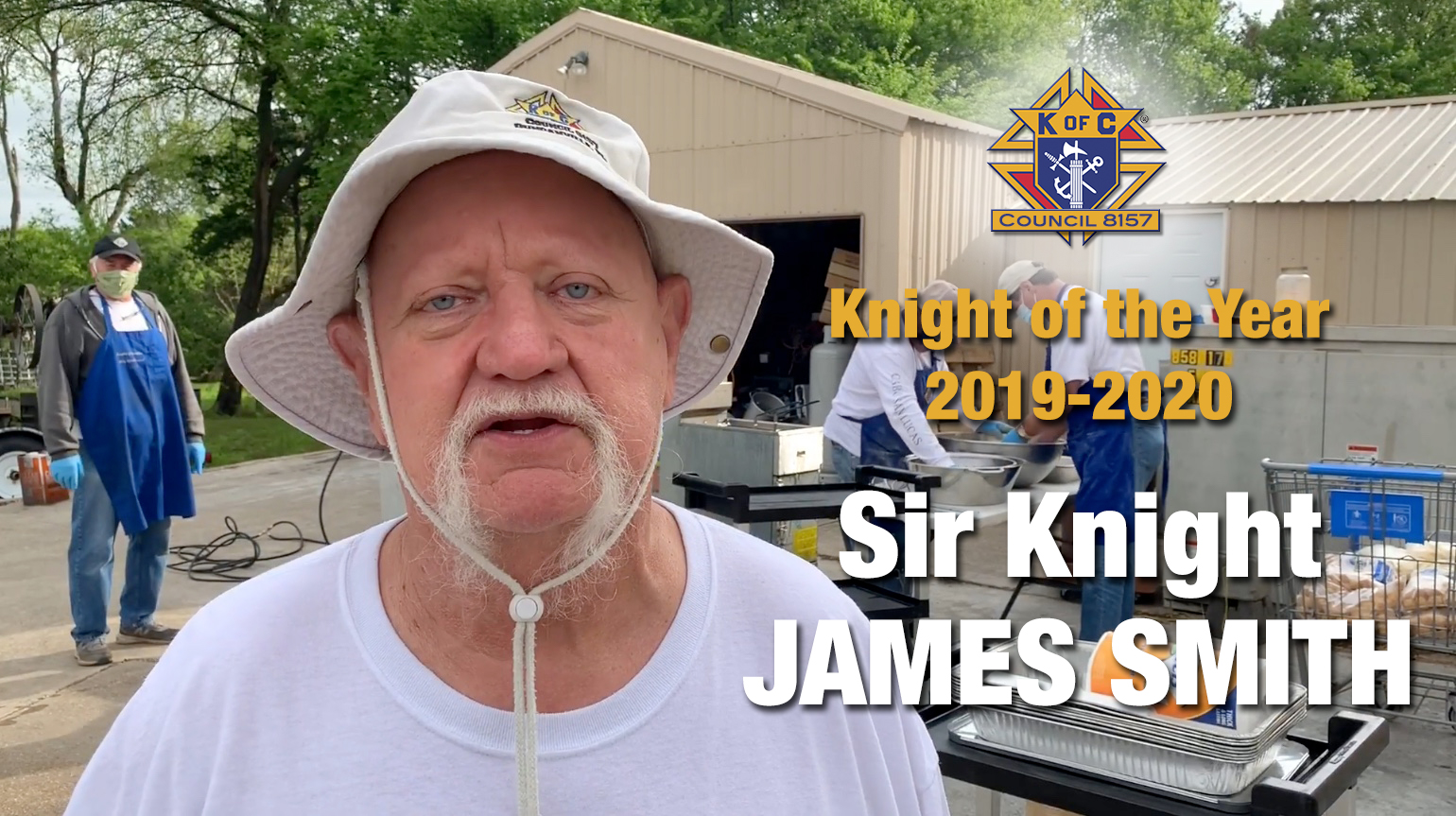 Sir Knight James Smith, our council’s Worthy Treasurer was voted as the Knight of the Year 2019-20 back on October 6th, 2020 and the announcement was made belatedly tonight at the Officers, Directors & Committees Meeting of December 15th. We have been waiting for the right time when we could all gather in person to make this presentation to our Worthy Treasurer but with the increased number of COVID infections being reported we decided to announce it now, so that he may enjoy his honor during the Christmas season.

Sir Knight James Smith, (center above) was recently voted the Knight of the Year 2019-20.  In reality James has been in the running for the Knight of the Year for the past few years because of his work ethic and his dedication to the Knights of Columbus.  James is everywhere when there is work to be done; especially if there is anything to be purchased from Sam’s Club for cook-outs or baseball games.  As a member of the baseball committee he has bought and supplied raw materials for all the concession stands in Cedar Hill for the past 7 years.  As Church Activities Director he has organized and directed all the activities for the annual fish fries, the annual church picnic and some of the supplies for the Annual Parish Festival.  During this years’ pandemic, he has organized and co-directed the effort to provide meals for the emergency personnel at Charlton Methodist a number of times.  He has also been influential in suppling goods for the bi-annual St. Joseph cook-outs, Seminarian cooking events and meals for the first responders and police personnel for the cities of Duncanville and Cedar Hill.    He has helped on Knight Hand projects as well as taken the role of Captain of Hospitality Ministers at the Saturday night masses.  He never misses a regular Knight of Columbus meeting and always attends the Officers and Directors meetings as well.  He handles all the outgoing monies as Treasurer and accounts for all monies deposited or spent.  On top of all that you couldn’t find another person with more honesty or integrity than James.  When he says something you can take it to the bank.  James epitomizes the term humility. He treats everyone with respect and never looks down on anyone.  He is generous to a fault and is a good friend to all. James joined the Knights of Columbus on February 26, 2013 and has since obtained the title of Sir Knight as he joined the ranks of the 4th degree.

James and his wife Judy live in Duncanville and are blessed with three children and a number of grandchildren.  Congratulation, James’ you are an example to all of us. Congratulations to the new worthy recipient of the honor of Knight of the Year of Council 8157.

By: Jorge|Knight of the Year