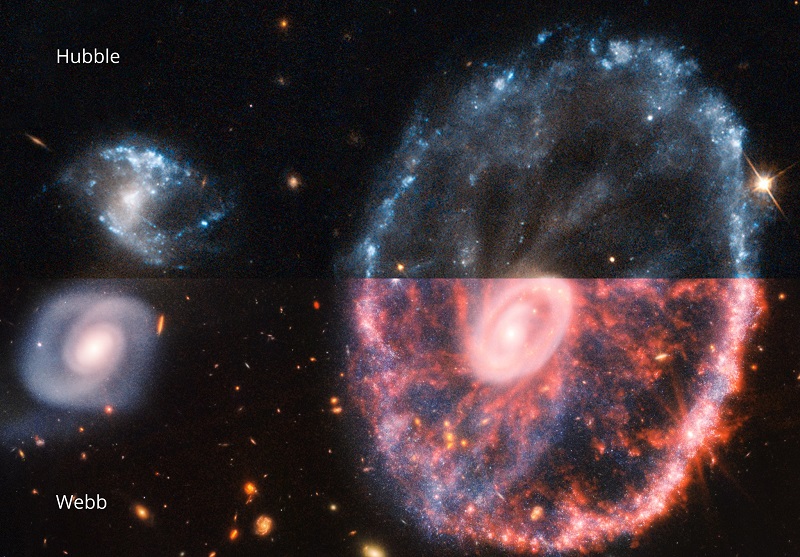 (Part One)
“Unless I believe, I shall not understand” (St. Anselm)

Most of us have seen the recent pictures from the James Webb Telescope that marvelously exposes the millions of galaxies billions of light years away. We experience the same level of awe when we glimpse into the strange world of quantum mechanics with its constant variety of quarks and neutrinos and its cat-in-box theories. Now that we have the technological knowledge and means to see the vast heights and deep chasms of creation, it is absurdly hard not to be humbled by the immensity of God and us. Some, like the late physicist Stephen Hawking, say all that we see in space was created by “Gravity”. Human pride is a hard nut to crack. Is gravity our creator or are we the creation of a loving God who sent His Word-Jesus Christ-at a particular time in history, suffered, died and rose again, and opened the gates of heaven to prove His love for us?  Could the earth and all the universe evolved from nothing save gravity?
If we evolved from nothing, then we have nothing to base our moral code on because human knowledge, science, cannot explain morality. Albert Einstein once said: “You cannot turn around and speak of scientific foundations of morality. Every attempt to reduce ethics to scientific formula must fail” (Berlin, 1930). In other words, science cannot create a morality for human society. Without God, what is considered good and moral can be whatever those in power want it to be.  Many in today’s godless society, if their delusions are allowed to be developed unopposed, would create a culture that is technologically-obsessed, shallow, emotionally-fragile, lonely, and distrustful. It gets down to what is the source from which everything came.  What is unique about humans that separates us from all other life forms and species?  Both the heart and the mind are essential to the purposeful life of mankind.  Today, God’s very existence is questioned by many, unfortunately. The complete human life exist on two planes; seen and unseen; the planet size material world where we plant our feet and call ‘earth’, and the mostly unseen world of our soul which seeks to win the battle between good and evil to get to heaven.  The “city of God”, which is awarded to all the elect who win this fight and whose names are written in the ‘book of life’. Mankind must choose between what comes first, eternal heavenly bliss or temporary earthly satisfactions. We must answer the perennial question faced by all previous generations; what should most concern us in the brief life span of the present and what comes after a death we cannot evade? Today’s dominate culture beckons us to live thoughtlessly and superficially and urges us never to reflect on the essentials of living and dying, substituting in its place a philosophy of “eat, drink, and be merry”. It is a culture where common sense goes to die. Jesus taught us that the only way we can obtain relative happiness in this life and eternal happiness in the next is to live by the truths found in the Gospel. The mysteries of God are no longer hidden but revealed to us by Divine Revelation.
True faith and belief are not the enemy of human knowledge and scientific reason. God would not have given us intelligence if He did not want us to explore our world and worlds beyond. But He wanted us to see Him in the sun, moon, and stars, molecules, atoms and quarks. Do you believe that gravity is our creator? How can gravity exist without the push and pull between different objects? Where did those objects come from for gravity to exist? Around and around we go and where our godless theories stop nobody knows. You can take it from there.
“In the beginning was the Word, and the Word was with God, and the Word was God; all things were made through Him, and without Him nothing was made”(John 1:1-5).                 TO BE CONTINUED
SK Wendell Jeanpierre, Lecturer