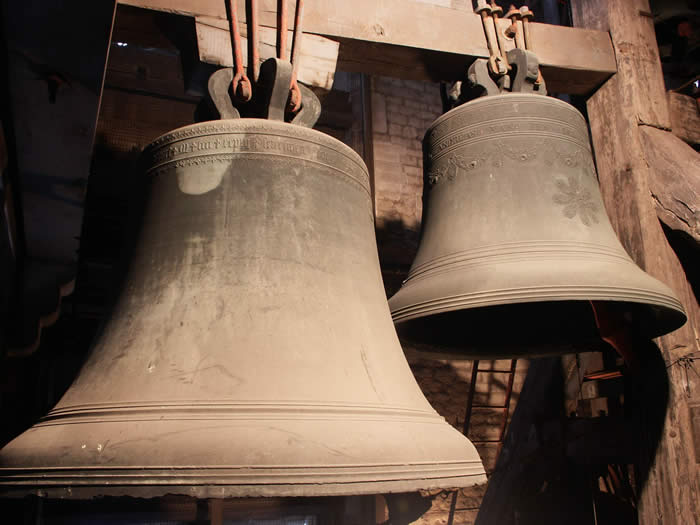 [dropcaps] I [/dropcaps] n case you haven’t noticed, spring is just down the road, 16 days away.

Ash Wednesday marks the beginning of our church season of Lent. The parish will have at least one evening for Reconciliation, an opportune time to do a little spring cleaning of our souls.

When I was growing up, spring brought the promise of warm days and cool nights. It was a time to clean out the old and bring in the new. The storm windows that were hung last October were taken down, and the window screens were put up in their place. Our house was a bit of a challenge since it was built back in 1917 by a couple of Irish brothers who, according to those who supposedly knew, “never had a sober day in their lives.” I don’t know just how true that was, but I do know that no two of our 19 windows were the same. We had 19 different storm windows and screens to sort out.

The annual spring cleaning would commence shortly after word was received as to the expected return of our “snowbirds.” The family – that is, my aunts, uncles and cousins – would gather at my grandparents’ summer home on Conesus Lake, New York, to clean out the last remnants of winter, air the place out and generally get the house ready for the family patriarch’s return. The house had been unoccupied since the previous October, when “Duke” and his loyal and loving wife, Katherine, packed up and headed south for the Atlantic coast of Florida. Their winter home in Melbourne became world famous as it was later known as Cape Canaveral. But in their day, it was a sleepy, backwater retirement village that became active, although at a somewhat slow pace, when the “snowbirds” arrived. I brought up the spring cleaning of my grandparents’ cottage because it is sort of my topic for this evening. Over the year, I have stashed away a couple of items that were interesting to me. And so tonight, I’m going to do a little spring cleaning of my own.

“Many years ago, back in the old country, occasionally a fellow would get so wrapped up in the good fellowship and camaraderie of the evening that he would overindulge in the spirits and appear to have gone to meet his maker. Years earlier, there would be an occasion to disinter a person who had passed on. Now, there was no known good reason to raise the dead, so it must have been body snatchers. You could get good money for delivering a fresh body to someone at a medical school and, as always, good money was hard to come by in the old country. The coffin would be delivered, money exchanged hands and the deed was done. Except word got out that occasionally when the lid was removed from the coffin there would be bloody scratch marks on the inside of the lid. The conclusion reached was that the deceased hadn’t been when the coffin had been interred.

Now the Irish are an inventive people and hence the “wake” was born. 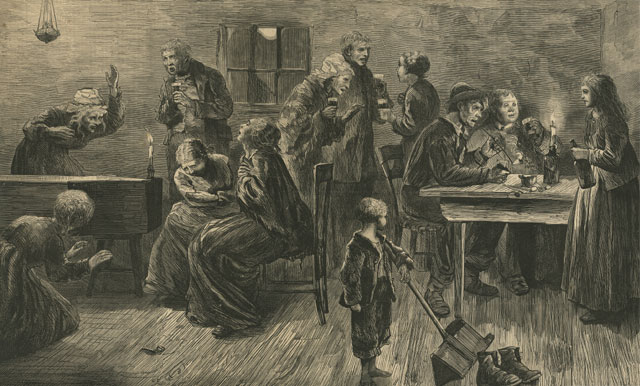 The inert body of one who was assumed to have passed on would be returned to his home by his friends and laid out usually on the kitchen table as being the only place suitable in the house. A few of his pals would then spend the rest of the night sitting with the body in case he should wake from his spirit-induced state. If the sun rose and the body was still inert, a coffin would be prepared and his family and friends would gather. The pubs generally didn’t open until noon, and that was when the procession would form up. They would all process to the local parish church, stopping at each and every pub along the way to toast the departed and in hopes that maybe the familiar surroundings might revive the fellow. All too soon, they would reach the church, where the services for the deceased were held. His fellows would be praying that just possibly the unfamiliar surrounds of the church might turn the trick and revive their departed friend. It was a short walk to the cemetery since many of the parish cemeteries were located next to the church. A long string would be tied around the deceased’s finger, the lid would be nailed down and, after a few more words by the priest, the coffin would be lowered into the ground. The grave was then filled in, and the journey back to the dear departed’s home began, again stopping along the way to speak kindly of their former mate and share a pint or two.

Why the string? Oh, yes. The Irish are by nature a cautious people; we do not take much for granted. Next to the grave, a stake would be driven into the ground, an eyelet would be screwed into the stake, and the string would be passed through the eyelet and tied to a bell. If the bell should start to ring, then people would rush to the cemetery hoping to be in time to save their friend from an early and untimely grave.

The ringing of the bell has always brought to my mind a poem that I first read in high school. I recall my grandfather’s funeral and that of my Uncle William, too. Both were pre-Vatican II, and in both the priest wore black vestments. Everyone wore dark and somber colors. They spoke in whispers, tears flowed freely, and there was much wringing of hands and tissues. Both were days of sadness and mourning. The service was to mark the passing of a loved one out of our lives. Never to hear that familiar voice, never to see that loving smile or feel that familiar hug again.

Today, the priest wears white and the service is for the living; a time to rejoice in the life of the deceased with the faith that they have gone to their reward, an eternal existence in the presence of our Lord

The poem I referred to is by the English poet John Donne, 1572-1631. Many of you have heard this before, but please bear with me:

“No man is an island, entire of itself: every man is a piece of the continent, a part of the main; if a clod be washed away by the sea, Europe is the less, as well as if a promontory were. As well as if a manor of thy friends or of they own were; any man’s death diminishes me, because I am involved in mankind; and therefore never send to know for whom the bell tolls; it tolls for thee.”

Donne contends that everyone is bound together in the brotherhood of mankind. The passing of one is a loss we all share.

When we join this order of Knights, we join a brotherhood born of a common faith, a common purpose and a common set of moral and ethical values. Our Order tells us that we have no more pressing duty but to care for our fellow Knight’s wife and children in the event of his death or disability. We assume the role of “Defender of the faith,” just as did the Crusaders of the Middle Ages, although we do it with prayers and service to our community and by setting a good example for our youth and fellow men. We are challenged to grow ourselves in our common faith – learning more about our faith and how to be better Catholics. 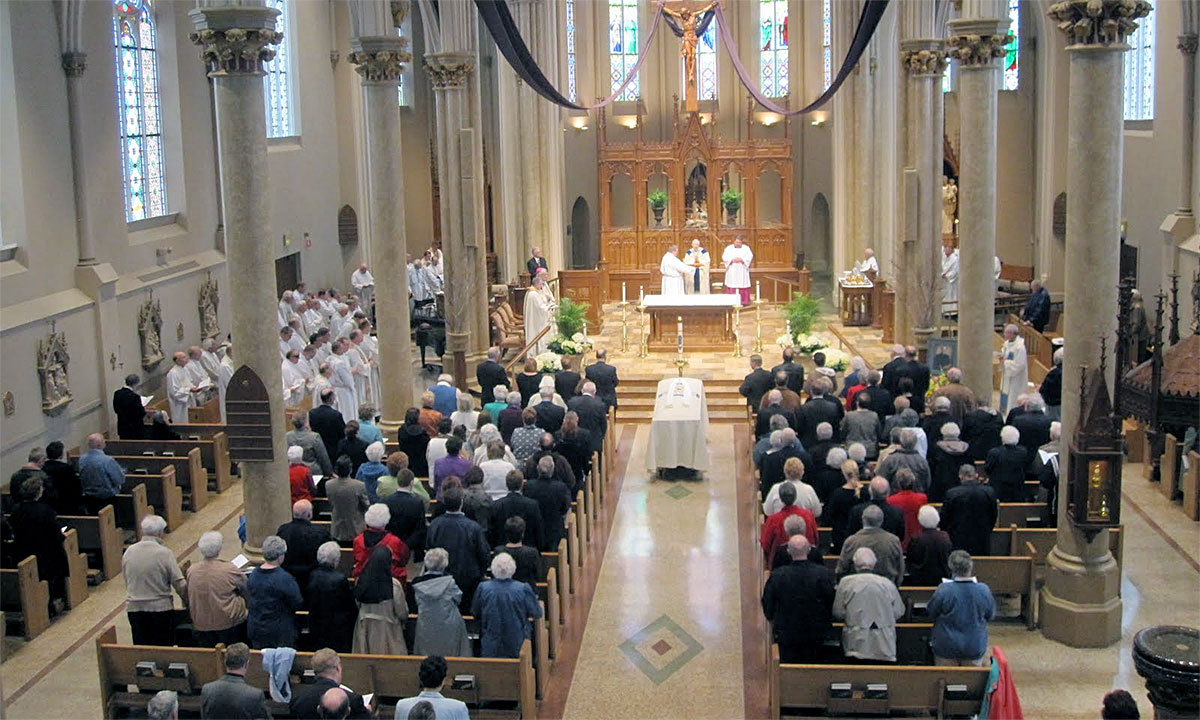 As we mature, we grow in understanding. Whenever I hear the phrase “for whom the bell tolls,” I am reminded of my grandfather and his story of the Irish wake and that bell in the cemetery. As I matured, I began to develop a deeper understanding of what John Donne was saying. Even though we have changed our understanding of what a funeral Mass is really about, I still feel that when the church bells ring out at a funeral – they truly toll for the living, not for the dead.