THE ESSENCE OF EASTER 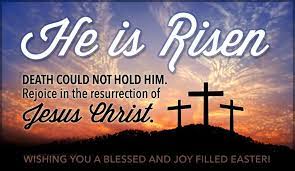 The Resurrection of our Lord and Savior Jesus Christ is the foundation of our Christian Faith. His resurrected body was historically verified by the New Testament Apostles and witnesses numbering in the thousands. He was crucified, died and was buried and raised on the third day in accordance with the scriptures.
“If Christ has not been raised, then our preaching is in vain and your faith is also in vain.”(I Cor. 15:14)
More than all the great miracles of His earthly ministry the Resurrection, above all gives the definitive proof of His Divine authority which He had promised and fulfilled.  By His death He freed us from the effects of what sin had caused; separation from God. Original Sin and guilt had to be redeemed and made good by the sacrifice of the Spotless Lamb. Through His unmerited death on the Cross, He did what we could not:  He paid our debt. He took on the consequence of sin, though sinless in order to wipe the slate clean. In this respect, the Resurrection of Jesus is the definitive victory, that is, over death, a triumph of the salvific love of God. Jesus came into the world to build the kingdom of God, crushing the head of the serpent Satan, who is not just a metaphor or sin but a real malevolent presence that exist in the current world.
Jesus’s death and resurrection reconciled man to God. Rebellion against God and His Commandments is the greatest failure of creatures endowed with intelligence and free will. Starting in Heaven, proceeding through the Garden raising his fists at God at the tower of Babel, etc. is the unescapable tragedy of human life through the ages continuing to this day.  Between creation, the fall and redemption, sin, and grace, the world which came forth from the Hands of God the Creator, returns to Him redeemed by the blood of Jesus Christ. The dark of night became the light of day.
In a culture on a slippery moral slope dominated by a crises of values and the true meaning of what it means to be human, Christianity has also come under attack. This “anxiety of purpose”, has given birth to serious social consequences as we have seen in the past few years. Young people today have many positive traits such as generosity, anti-racism and the struggle against political and social inequality. But there is also among them an “identity crises” that is manifested by confused thinking that rejects God, His Commandments, and His Church   “Who am I”?,  Who is my neighbor?” “Who is my brother?” “To what group I belong?” are the questions that result when centuries of spiritual wisdom are cast away as “archaic” and not relevant to our “scientific” and more “enlighten” times. What we have today is a sorry attempt to tell us that there is no God, and therefore no truth, no reason, no purpose and no meaning to life. Truth is whatever you want it to be.
The only path to true earthly happiness is through an understanding of God who created us in His own likeness and image, who loves us, who endowed us with a soul which does not die but is rewarded or punished by the “Truth” proclaimed and practiced during our short passage through life on earth. What makes us human beings unique is our capacity to reason and to use that reasoning to inform our choices our “freedom to choose” so to speak ,good vs. evil.
Jesus, the Victim eternally appointed to take away the sins of the world, the Son of God, the first and the last, He who holds in His hands the keys to life and death. Now man, if he wants, can be saved if only he has faith in Him. We celebrate Easter to honor our Savior and Redeemer .He is risen.  He has accomplished everything; sacrificed Himself, elevating Obedience to the perfection of being able to die on the Cross to do God’s will.  Jesus has risen and His redemptive sacrifice shows that not only does God love, He is Love.   Jesus does not want our ruin but only our salvation. May this Easter preparation be a time of holy purpose for all of us; in prayer, penance, fasting and sacrifice. Let us return to God, return to faith, return to Cristian morality the study of God’s Word especially the Gospels let us return to Jesus!