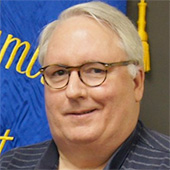 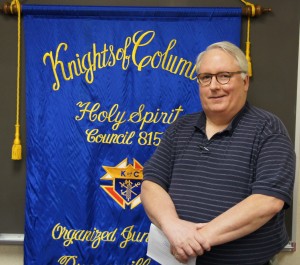 Craig Reves and wife Katherine met on a double date at a movie during their LSU days in the early 1970s, Katherine matched with Craig’s friend and vice versa. That changed soon after the closing credits for The Poseidon Adventure. They’ll be married 39 years in August and live in Duncanville. He converted from Episcopalian to Catholicism when they wed. Craig said he joined the Knights to regain a sense of civic and community service similar to what he enjoyed as president of the Kiwanis Club back in Baton Rouge. They came to north Texas about 13 years ago via job transfer and have been parishioners for almost five years. Craig is the chairman of Holy Spirit’s Sacred Arts Committee and is a lector (what a voice!). Katherine is a Eucharist Minister and a companion for those who provide Communion to the sick and home bound. Craig is a project manager for a communications company based in New Jersey, working out of his home (upstairs with the dog). Katherine teaches English and History at the middle and upper schools at Canterbury Episcopal in DeSoto. They have four grown children. John (37) lives in Salzburg, Austria, will soon be ordained as a Deacon and has a wife and a daughter. Anna (35) is a Major in the Marines, based in California. Nicholas (28) works for the Department of Defense in Washington. Phil (26) lives in Duncanville and is a personal trainer.