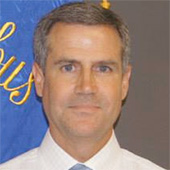 Hardly standard fare for an exemplification ceremony, one of Greg Porter’s first “duties” only minutes after earning his first degree on July 23 was to provide transportation home for long-time Knight Don Heitzman. It was fitting for Greg, who said he has been influenced by fellow KC Cedar Hill residents like Don, Bob Foster and Andy Goza. “If I could be like half the person that those people are, I’d be in pretty good shape,” he said. Greg is Cedar Hill’s deputy city manager, 26 years after serving an internship there while earning a degree from SMU in 1988 in public administration and political science. That was the year in which he and wife Pam got married and moved to Cedar Hill. He grew in Irving as a Presbyterian and converted after marrying Pam, then a member of Immaculate Conception in Grand Prairie. They met while working at Six Flags (Skeeball Palace) and have three children. Jessica (22) just graduated from Texas A&M in allied health and works at Charlton. Joshua (8) is headed into the third grade, and Amanda (6) will start first grade. Another son, Andrew, was a third grader at St. Elizabeth when he was killed in an automobile accident in 2002. “It was a difficult time, but we’ve been blessed in immeasurable ways by our Holy Spirit family, our St. Elizabeth family – the school, the parish – and our Cedar Hill family.”