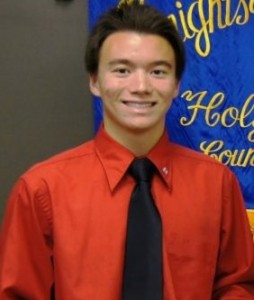 JAMES DEAN joined his father, Larrie, in the council shortly before heading off for his freshman year at Texas Tech. He graduated from Midlothian High last spring with Distinguished Honors (GPA of 4.79), was on the tennis team’s top doubles pairing and already socked away 12 hours’ college credit. He was a captain of Holy Spirit’s altar servers and always warmly greeted parishioners, even as the church was emptying out after Mass. His college parish is St. Elizabeth’s in Lubbock near the campus. James chose Health Exercise and Sport Sciences as his major, plans to also get his master’s degree from Tech and be-come a physical therapist.