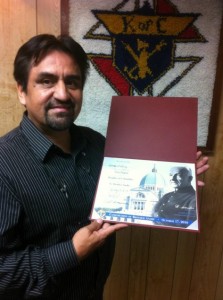 JORGE RUIZ and wife Kathie moved to Texas from New York in 1980 and began attending Holy Spirit about two years ago. Jorge grew up in New York after emigrating from Ecuador at the age of 12, which reunited him with his parents and six siblings. He graduated from the New York High School of Printing in Manhattan soon after meeting Kathie and taking her to the prom – at the Empire State Building. He runs his own graphic design business and produced the attractive bulletin inserts that promoted the recent Fall Festival. Kathie is a psychotherapist in private practice. Married 34 years, they have three grown sons.