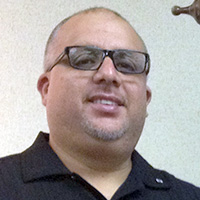 [dropcaps] J [/dropcaps] oseph and Carmen live in Cedar Hill and have been parishioners for about three years. They were married four years ago to form a blended family. He has two grown children (Selena, 22, and James Anthony, 20), she has two school-age children (Esteban, 10, and Jacob, 6) and they added Joseph, Jr. who just celebrated his second birthday on Oct. 5. Joseph was a young dad soon after graduating from Dallas’ Sunset High and headed straight to work. He eventually earned a degree from UT-San Antonio in Mexican-American studies after 10 years. He’s an agent manager for United Health Care, and Carmen is a social worker at Children’s Hospital. Joseph said he joined the KC’s to provide a positive role model for his two stepsons and youngest son.