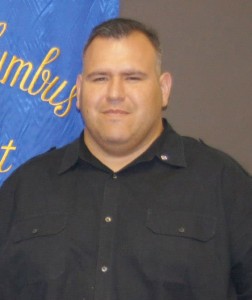 LUPE HERNANDEZ mentioned “unity” and “brotherhood” as his primary motivations for becoming a Knight. He and wife Meyela became parishioners shortly after moving from Oak Cliff in the spring of 2010. Lupe grew up there and graduated from Sunset High School in 1994. He then spent four years in the Army before going into various lines of work that included running his own business for a time. He’s now a benefit consultant for a Medicare advantage company based in Dallas. Meyela is from Monterrey, Mexico. They were married in 2004. Lupe has two children, Emily (12) and Jay (7).