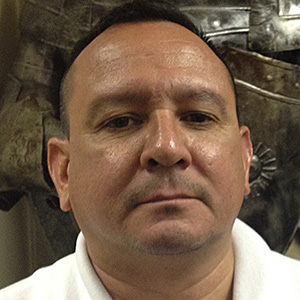 Richard grew up in Dallas, moved to DeSoto in November 2013 and is looking forward to becoming more involved as a Holy Spirit parishioner – including with the Knights. He graduated from Kimball High and headed straight to the working world. Richard has been employed by the City of Dallas for more than 20 years and currently serves as a technician at a water treatment plant at Bachman Lake. He has been a member of the Navy Seabees for 17 years – “And I’ve never been on a ship,” he said. Richard’s military duty took him to Afghanistan for seven months in connection with a Marine unit. Richard’s children are Monica (27, living in Las Colinas) and Richard Jr. (22, living in Grand Prairie). He’d especially like to put his mechanical skills to good use and also mentioned an affinity for cooking.