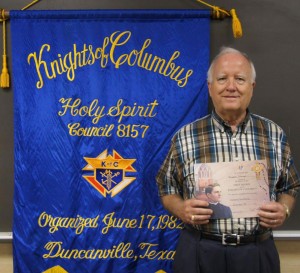 Bill and wife Toni are among the founding families of the parish. He was the first head of the parish council and led the choir at Masses at Reed Junior High. Bill is a lawyer and a judge, serving as the presiding municipal court judge in Duncanville for 30 years. He grew up in Dallas – his parents were among the founders of St. Thomas Aquinas – and graduated from Jesuit. From there, he got his bachelor’s degree from the University of Texas and his law degree from SMU. The Neilons live in Cedar Hill, celebrated their 40th anniversary last summer and have two children. Daughter Michelle McFarlin, 36, has two children. Son Marty, 30, just got married last summer. Bill is also active in the Duncanville Lions Club and will become its president in July.