First Ever Drive Through Fish Fry 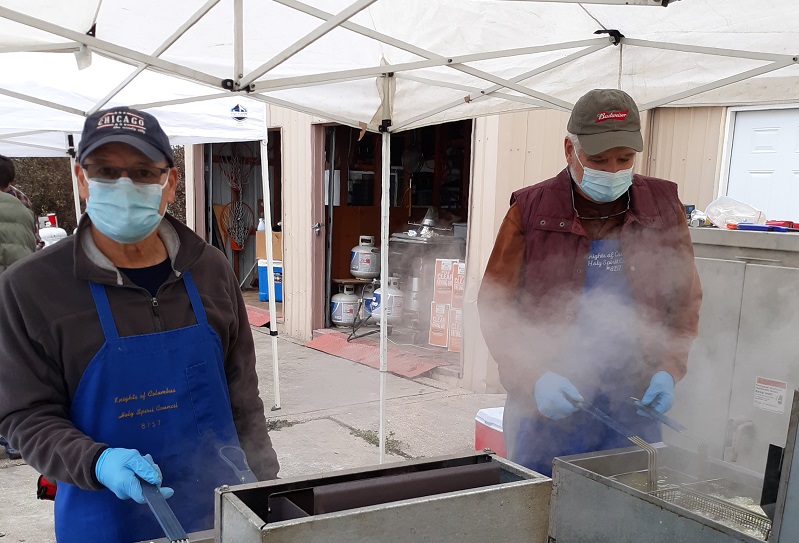 Without a doubt, the turnout for our first ever drive through fish fry was a surprise to everyone there on Friday February 26, 2021. There was such an overwhelming response to the fish fry that it soon became apparent that we would be able to serve only those folks who had pre-ordered and pre-paid for their meals. That meant that many potential customers had to be turned away.

It seemed nothing could dampen the spirits and energy of the 23 Knights (plus two lady helpers) during the entire event. Maybe it was just a chance to get out of the house and be with the “band of brothers”. At any rate, everybody pitched in and did their share to make the event a success.

John Espree and Al Evan were the traffic control guys. Jose Montoya and Allen Reitmeier with some help from Efrain Ochoa cooked the french fries and hush puppies. David Dybala and David Ybarra fried all the catfish. Robby Zabalan hauled the fish and fries and hush puppies from the cooking site into the kitchen area where Steve Reid, Cappie Wood, Mary Archer, and Eric Conner packaged the meals made up of catfish, hush puppies, french fries, coleslaw and a cookie.

Jorge Ruiz, James Smith, Jim Russell, Keith Archer, and Peter Perta handled the administrative details of who gets meals and how many.

Chris Edwards and Trevor Edwards handed the meals to the customers as they drove through. The whole process worked very smoothly.