Installation of 2014-15 Officers and Awards Night 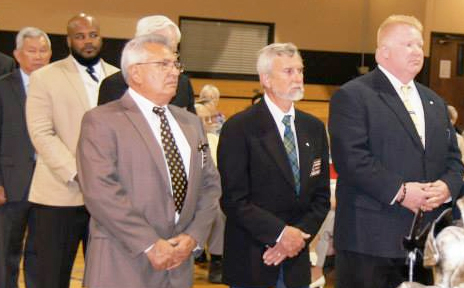 The installation of our 2014-15 officers and the crowning of Tom Greco as the council’s 28th annual Knight of the Year were the highlights of 8157’s annual awards dinner held in Holy Spirit’s community center gym on June 14.

Tom has spearheaded the effort that led to the creation of the council’s first degree team two years ago. That convenient avenue for bringing in new members has greatly contributed to continued significant growth in the council. Tom was awarded not only with the ceremonial bowl handed out to the winner each summer but with an additional “Tom-specific” gift – a new cowboy hat.

“This is the most amazing thing,” said Tom, who recalled off the top of his head the dates that he took his First Degree and Major Degrees in 2007 and ‘08. When he called his father to tell him that he’d joined the order, his father replied, “They took you?”

The two recipients of the council’s annual scholarships were announced. They were Trevor Edwards (son of Chris Edwards, graduate of Duncanville High headed to Texas A&M-Commerce) and Taylor Kvapil (granddaughter of Jack Ramsden, graduate of Waxahachie High headed for Stephen F. Austin).

With Andy Goza serving as emcee, a number of groups of Knights were recognized.

Thanks to all of the Knights and their ladies who made the evening possible, including providing red-white-and-blue leis for the women in attendance.