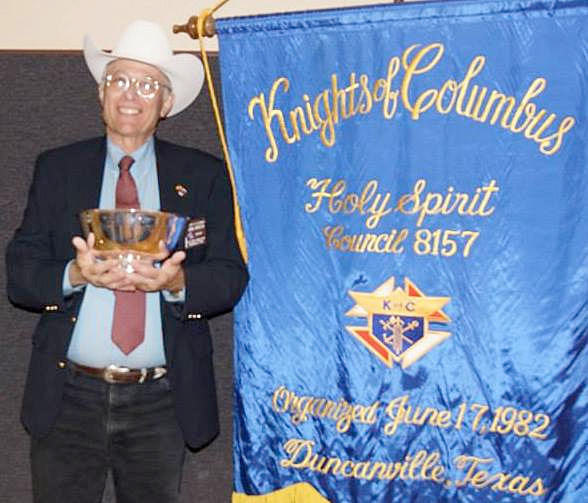 Knight of the Year – Tom Greco

Moments after Tom Greco was presented with the traditional silver bowl for being named 8157’s 28th annual Knight of the Year, he asked fellow members of the council’s degree team to come up and hold the bowl themselves since they were so much a part of the award. Kind of like winners of the Stanley Cup each holding it after skating to victory in the hockey playoffs. “It’s just the most amazing thing to me,” Tom said. “What wonderful brothers I have in this council.”

Tom was the driving force in establishing our first degree team just a few years ago and has been in charge of it since then. Having a degree team has been a monumental part of the council’s growth in recent years, where we’re no longer dependent on locating a degree ceremony elsewhere in the diocese. We know there’s an avenue for installing new members every fourth Tuesday right here at Holy Spirit.

Tom joined the Knights on Nov. 13, 2007 and took his major degree on Jan. 20, 2008, dates that he can recite off the top of his head. He ironically was invited to join by the council’s membership director at the time, Bill Dover, and is now the council’s membership director himself. Tom moved from the office of Warden to that of Chancellor with the beginning of the new fraternal year on July 1.

Tom and his wife of 39 years, Helen Beggane, are familiar faces in the choir at 5:30 Mass on Saturdays, and Tom also serves as a lector.

It would be difficult to identify a previous 8157 Knight of the Year who was more appreciative of receiving the honor. Two weeks after the mid-June announcement, Tom wrote a letter to the council that was read at the July general membership while he was out of state visiting his parents.

“Still, I can’t find words adequate to say how honored I am. … An award such as this is more than a recognition of past performance. It’s also a call for continued service. You have bestowed a great honor on me, and I plan to thank you by continuing to do those things you have found valuable in my tenure as a Knight.”