[dropcaps] I [/dropcaps] may be wrong, but until someone offers a better explanation, this is why I believe “Unity” was adopted as the second principle of our Order.

What we are as a nation is dependent upon our history. The world we live in is both different from and similar to the world of the 1880s. The problems we face as a nation and as individuals have their roots buried deep in the past. To comprehend why “Unity” is the second principle our our Order, we need to look at our roots.

King Henry VIII established the Church of England because the Pope would not agree to his request for a divorce from his Spanish queen. The divorce was necessary so Henry could marry a second time in his quest to father a male heir. Henry had six wives and, alas, fathered two legitimate daughters and no sons. The Church of England became the official religion of the United Kingdom to the exclusion of all other religions, particularly the Catholic Church. Over the ensuing centuries, Parliament passed several laws that punished those who did not embrace the Church of England.

The settlement of North America allowed several persecuted groups to pursue their religions with less persecution than they experienced in the United Kingdom. Several of our original colonies were founded by groups fleeing the English church’s authority. The pilgrims settled the Plymouth plantation in 1620. The Massachusetts Bay colony was founded by the Puritans in 1628. The Quakers settled the Province of Pennsylvania on March 4, 1681. Maryland was founded in 1634 by Lord Baltimore and was the first colony to grant religious freedom to Catholics. Lord Baltimore was Irish.

Under English rule, Irish Catholics lost all political power and most of their rights as British subjects. Under Henry VIII, Ireland was divided into three regions; one was directly under English control, the second was subject to English law but under Irish rule, and the third was nominally independent but still owed allegiance to the British crown. Early in the 1700s, Catholics in Ireland were disenfranchised, and a Protestant controlled Irish Parliament was elected. Although 85 percent of the population was Catholic, they were governed by a 15-percent Protestant population that had been relocated from England and Scotland to settle on confiscated Irish land.

In 1776, the 13 colonies revolted against the oppressive rule of the British Parliament. Resentment against the power of the Church of England resulted in the first amendment to our Constitution, which replaced the Articles of Confederation in 1787.

The world of 1882 when the Knights were founded, although different from the world we live in today, faced some of the social issues that still persist today. The Catholic Church was under attack through prejudice against individual Catholics. Today, the church is under attack for our beliefs, especially those that address the sanctity of life. Although the Bill of Rights prohibited the government from passing laws that would establish a state religion, it did not erase the prevalent attitude developed over centuries of English prejudice against Catholics. Today, that prohibition has been interpreted to justify the exclusion of any public expression of our belief in God. As late as 1960, we saw evidence of this prejudice against Catholics when President John Kennedy campaigned for the presidency.

Some of the same issues our country faced in 1882 are with us today, only some of the names have changed. Immigration was a major issue. In the 1880s, the concern was that the country was being overrun by the poor from Europe, especially refugees from Ireland. The Irish also had the additional curse of being Catholic. Today, that concern is directed mainly against Hispanics.

This prejudice has a history in my family. My mother’s maiden name is O’Connor. According to family legend, the man who was the head of the family when they arrived in this country changed the family name from O’Connor to Conners, attempting to disguise his family’s Irish heritage. The story continues that my grandfather changed his name back to O’Connor and, when he did, his two older sisters refused to have any further contact with him and avoided any family gatherings where he might appear.

My grandfather was proud of his Irish heritage, and possibly his pride might have been highly justified. Irish legend speaks of a King Conchobar mac Ness, a 6th century king of Ulster. At least one Irish historian says that the name “O’Connor” evolved from that king. This linen of Irish family shields [displayed in the council meeting room during this talk] has six O’Connor family shields. I have no idea which if any are associated with my family.

The venerable Father McGivney realized that, as individuals, the members of St. Mary’s parish were weak and unorganized. As such, they were not equipped to grow and prosper and could easily be swallowed up in general society. He believed that by working together, they had a much better chance of survival. He had observed or was probably aware of Irish Catholics who, like my ancestor, had adopted a different name and denied the church in order to survive in the 1880s. Father McGivney conceived of an organization that would:

Calling together leading members of the parish, the organization he proposed soon became our Order. I was pleased to notice that the organization charter lists the names of the original members starting with Father McGivney. The next name listed is Matthew C. O’Connor. An ancestor of mine? Probably not. But a distant relative? Maybe.

Over the course of my career, one of my former employers was in the habit of incorporating what were referred to as “buzz” words into their annual training programs. One such word was “synergy.” Synergy is defined as “the interaction of elements that, when combined, produce a total effect that is greater than the sum of the individual elements.”

“Unity” today is not a question or survival but of “synergy.” We are a synergistic organization, and united we are much stronger than we are as individuals. Working as individuals, we would not have an insurance program that surpasses $90 billion; we would not have distributed more than 40,000 wheelchairs over the last decade; and no matter how generous we are, I doubt if acting as individuals we would have donated $10,000 in aid to the people of Alberta, Canada and $180,000 to the people of West, Texas. As the venerable Father McGivney recognized, together we can do much more than we can hope to accomplish as individuals. 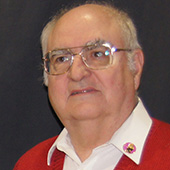