ur Worthy Deputy Grand Knight and the Faithful Navigator of Assembly 2799 has spoken tonight about the Clergy Appreciation Dinner to take place on Thursday, Nov. 12. He has also mentioned that there will be two Fourth Degree Exemplifications that will take place this coming Spring. So, what is this Fourth Degree, and why should I join?

To understand the founding of the Fourth Degree, it is necessary to understand the United States of the late 1800s. At that time, Catholics were subjected to significant incidents of prejudice and segregation. The economic pressures were significant. Women were unable to get meaningful employment. The men did not fare much better. It is difficult for us to comprehend the difficulties these families faced from our experience of a hundred-plus years later. Unfortunately, some of our brothers have experienced similar circumstances much closer than the three or four generations removal in my family.

In addition to the economic and social pressures, there was a climate that encouraged Irish Catholics to deny or hide their true identity. When my ancestors immigrated, the “O” was dropped from the family name and the name was changed from O’Connor to Conners. My grandfather restored the original spelling. His siblings didn’t agree. At this time in our history, there was a rise in the number of “secret societies.” Virtually all of these “societies” had membership restrictions that excluded Catholics and Irish. Membership did bring some benefits, among which was generally included access to better paying jobs.

On Oct. 2, 1881, Father Michael J. McGivney, the 29-year-old assistant pastor of St. Mary’s Church in New Haven, Conn., gathered a group of men that a few weeks later became the Knights of Columbus. His mission was to provide a mutual aid society that would also reduce the pressure to join non­-Catholic societies. Initially, there were plans to have several degrees of membership. The founding principles of the order were “charity” and “unity.” The principle “fraternity” was added in 1885. The multitude of possible degrees was soon reduced to the first three degrees that we have today. The new organization flourished. Supreme Knight James T. Mullen served in that office for four years and presided at the institution of 22 of the first 39 councils. In 1892, some 6,000 Knights marched in the New Haven parade marking the 400th anniversary of Columbus’ voyage of discovery.

Membership in the Fourth Degree was by invitation only. A Fourth Degree Knight had to sponsor you. You also needed a certification of communion signed by your pastor stating that you had received communion within the last two weeks and were a practical Catholic as defined by the Holy See. Many of these requirements have been relaxed since Vatican II.

The Fourth Degree within the Order is divided into provinces, districts and assemblies. Texas and Oklahoma make up the “Our Lady of Guadalupe Province.” The province has seven districts, six in Texas and one in Oklahoma. North Texas is the third Texas district. The third district has 39 assemblies. Assembly 2799 consists of five councils that represent about 18 parishes in the southern portion of the Dallas Diocese.

Assemblies are similar to councils in their organization. The top four officers have functions similar to those of the council officers. The presiding officer is known as the Faithful Navigator; the Deputy Grand Knight is the Faithful Captain, the Chancellor is the Admiral, the Warden is the Pilot and so on. Just as council officers have “jewels” to indicate their office, so do Assembly officers. 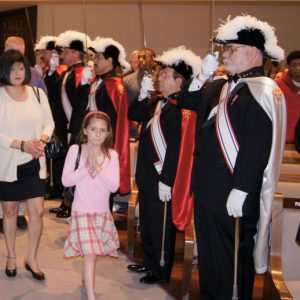 The Fourth Degree Knights are the public image of the Knights of Columbus. Their colorful capes and chapeaus are highly visible at the functions where they participate. Each assembly can organize a Color Guard. Members of the Guard wear the chapeau, the cape and the baldric with sword. The colors they wear designate their position within the order. Members have a red cape and white plume. The Faithful Navigator wears a white cape and plume. Purple is reserved for the Color Corps Commander. Members of the Color Guard have swords with black handles. Faithful Navigators and past Faithful Navigators have swords with white handles. Additional colors are green, gold and two shades of blue. The colors are traditional colors: red, white and blue for our country, gold and white for the church, purple represents penance and the green – well, this originally was an Irish organization.

The Color Guard participates in various church and civic functions. If you attend the Memorial Day activities at the DFW National Cemetery, the Knights form an honor guard for the ceremony and take part by presenting a rose for each departed service member or veteran over the last year.

So, what about the rest of the assembly? Not everyone is a Color Guard member? This year, the Assembly is hosting the Clergy Appreciation Dinner already mentioned. Additionally, we are conducting at least one flag retirement ceremony along with the local scouts, and we are sponsoring an essay contest with Bishop Dunne High School and St. Elizabeth of Hungary Middle School. We are also discussing the possibility of replacing U.S. Flags that should be retired at our local Catholic schools that are within our area.

Finally, Fourth Degree members can elect to have a chalice or ciborium presented as a memorial to the church or priest of their choice.

This coming year, there will be three Fourth Degree Exemplifications. The first will be on Feb. 27 in Carthage, Texas. The second will be April 2 in Wichita Falls, Texas. The third will be Oct. 1 in Addison. Spouses are invited to attend and will have a luncheon with a guest speaker while the Knights are going through the ceremony. There is a Mass and dinner that evening. Attendance is required only for the ceremony.