The Emblem of the Order

When I look at the Emblem of the Order – that is the official name for that pin, hereafter identified as the EOO – I see symbols, some of which are 3,000 years old. Symbols play a major role in our lives. Each one has a message that speaks to us whether we are conscious of it or not. We live in a world of symbols.

A couple of months ago, I discovered a lapel pin among my Uncle Bill’s possessions. Uncle Bill was a Knight. I know because I have his EOO and his rosary. No one could identify the lapel pin, and it was suggested that I ask Supreme to identify it.

I finally sent off an e-mail and, along with asking about the pin, I asked for a source for information about the EOO. I received an e-mail response from Tiffany Locke, curatorial assistant, Knights of Columbus Museum. They have no idea as to the meaning of my uncle’s pin. They did comment that, for several years, councils would adopt pins that were not officially recognized by Supreme. Their best guess is that it’s some sort of officer’s pin. In answer to my question about the EOO, Tiffany gave me a link to a 24-page pamphlet that describes the official pins and badges of the Knights of Columbus. 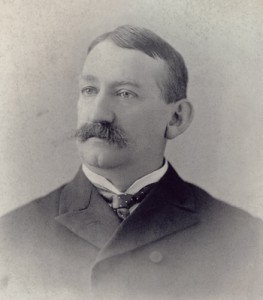 The EOO was designed by the Supreme Knight, James T. Mullen, and was presented at the second Supreme Council meeting on May 12, 1883. The EOO consists of a cross, a shield, a short sword or dagger, an anchor, a fascis, the letters “K of C,” and the colors red, white and blue.

The Formee cross associated with the church goes back long before the Crusades. In 1095, Pope Urban II called for a Holy War to reclaim the city of Jerusalem from the Muslim infidels. The First Crusade, 1096-99, eventually resulted in the formation of two major monastic orders of knights – the Knights of the Temple (the Templers) and the Knights of St. John of Jerusalem (the Hospitallers).

The orders took different paths, one acting as a police force, protecting pilgrims, while the other served the ill and wounded. To identify fellow members and to identify themselves to pilgrims, each adopted an easily recognizable symbol. I have always imagined the Templers wearing a white tunic emblazoned with a red cross front and the back. And I envision the Hospitallers wearing a black tunic with a white Formee Ccoss in a circle on the left shoulder.

Both orders were known for their feats on the field of battle. When the Kingdom of Jerusalem was conquered by Saladin’s army, the orders withdrew from the Holy Land. The Templers relocated to Europe, where, in 1307-12, they were persecuted and suppressed, particularly the king of France, and finally ceased to be recognized by the church.

So, what about the Emblem of the Order?

The Formee or Maltese cross is a traditional representation of the Cross of Christ, thus symbolizing the Catholic spirit of the order. It is also a recognition of the order’s principle of charity similar to the mission of the Hospitallers.

The base of the emblem is a Formee cross rotated 45 degrees. Mounted on the cross is a shield. The shield was a major component of a knight’s equipment. The armor, with helmet and visor, could cause confusion on the battlefield. The shield not only provided protection, it served to identify the knight by the symbols displayed for all others to see. On our Emblem, it serves to identify us as knights and to hold the sword or dagger, the anchor and the fascis (fas-ces).

The short sword or dagger was the weapon of a knight when mounted or engaged on a mission of mercy. The lance and broad sword were generally used in battle. The short sword was easier to use and generally sufficient for day-to-day use. Our traditions tell us that the mission of a knight was to protect the downtrodden, to comfort those in need and to serve the church. The mission of our order is charity, to comfort those in need and to serve as the strong right arm of the church.

We use the anchor to commemorate the four voyages of Christopher Columbus, Viceroy and Governor of the Indies, and the patron of our order.

The final symbol is a fascis. The fascis is an axe wrapped in a bundle of wooden rods. The fascis was the symbol for power during the Roman Kingdom, Republic and Empire. Usually, four Tribunes, each carrying a fascis, would accompany the king, council, emperor or other important government official when they participated in official functions. Mussolini adopted the symbol in an attempt to demonstrate the power of his government when he ruled Italy before and during World War II. Throughout history, the fascis has stood for a tightly bonded and efficiently operating organization, which we as knights strive to be.

The colors red, white and blue have multiple meanings. They are the colors of our country – red is the color of courage, blue is the color of hope and confidence and white is a symbol for nobility of purpose. These colors also have ecclesiastical symbolism. Red becomes the reflection of Christ’s redemptive blood shed on Calvary and of the blood of martyrs shed in the defense of the faith. White is the symbol for Christ-like charity, the first principle of our order. Blue is the color associated with Mary, Mother of the Church and of our Lord and Savior. Blue is then the color of Hope.

At the conclusion of the First Degree ceremony, when the Emblem of the Order is pined to our new brothers’ shirts, it marks the beginning of a never-ending journey to full knighthood. The journey doesn’t end with the conferring of the Third Degree but continues as a series of small steps, each one a challenge to grow in our faith, to grow in service to our community and in service to our fellow men.

Wear the emblem with pride – pride in the knowledge of what those who have come before you have achieved and with pride in what you know you can accomplish on your journey into full knighthood.