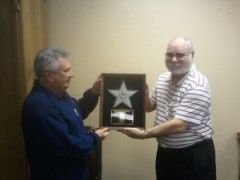 Bill Dover, District Deputy of District #86, presented our Grand Knight, Frank Salazar, two very prestigious awards this past December 4, 2012 as the regular general business meeting.  The ceremony was brief and without a lot of fanfare; yet the magnitude of the accomplishments of this Council were validated by these awards.  First up was the Star Council Award which is the top international award given to local councils by the Supreme Council.  To qualify the local council must have earned the Columbian Award, the Father McGivney Award and the Founder Award all  in the same Fraternal year.  The Columbian Award is given to those Councils that annually conduct at least four (4) major involvement programs in each of the following sections of the service programs:  Church activities, Community activities, Council activities, and Youth activities.  To earn the Father McGivney Award,  the council must increase membership by at least 7% during the fraternal year.  And to be awarded the Founders Award the council must have a 2.5% increase in insurance additions.  In addition the Service Program Personnel Report form (#365) must be completed and returned to the Supreme Council by August 1st following the end of the fraternal year.  This council under the leadership of Andy Goza and his Officers and Directors accomplished these requirement with flying colors. 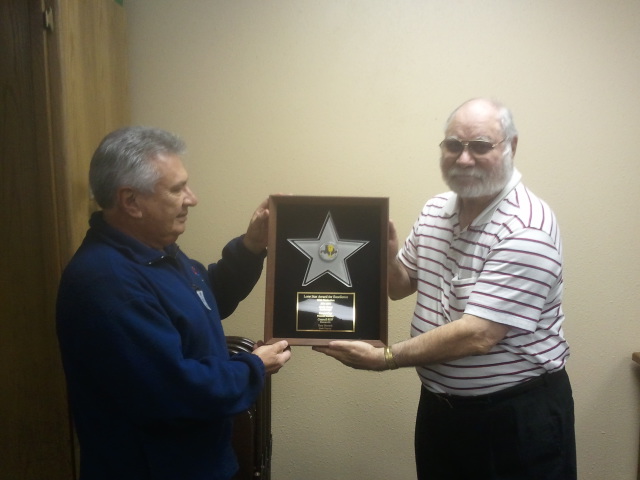 Next came the Lone Star Award for Excellence with Distinction.  This is the top state award and the qualifications start with meeting the requirements for Star Council.  In addition to Star Council, the local council must submit form 185 (Officers elected) on a timely basis, the council must pay the state Per Capita assessment by December 31st, meet the State Council Charity goal by December 31st, seat at least two delegates at the state convention and sponsor an active degree team and conduct at least two degrees during the fraternal year.  Again no problem for this council thanks to everyone’s dedication and Christian attitude.  Kudos to everyone and congratulation to the leadership that brought home these awards.  Awards are not why we do what we do; but to be recognized by leadership at the state and national level is pretty special.  Be proud of being part of the Knights of Columbus Council #8157.