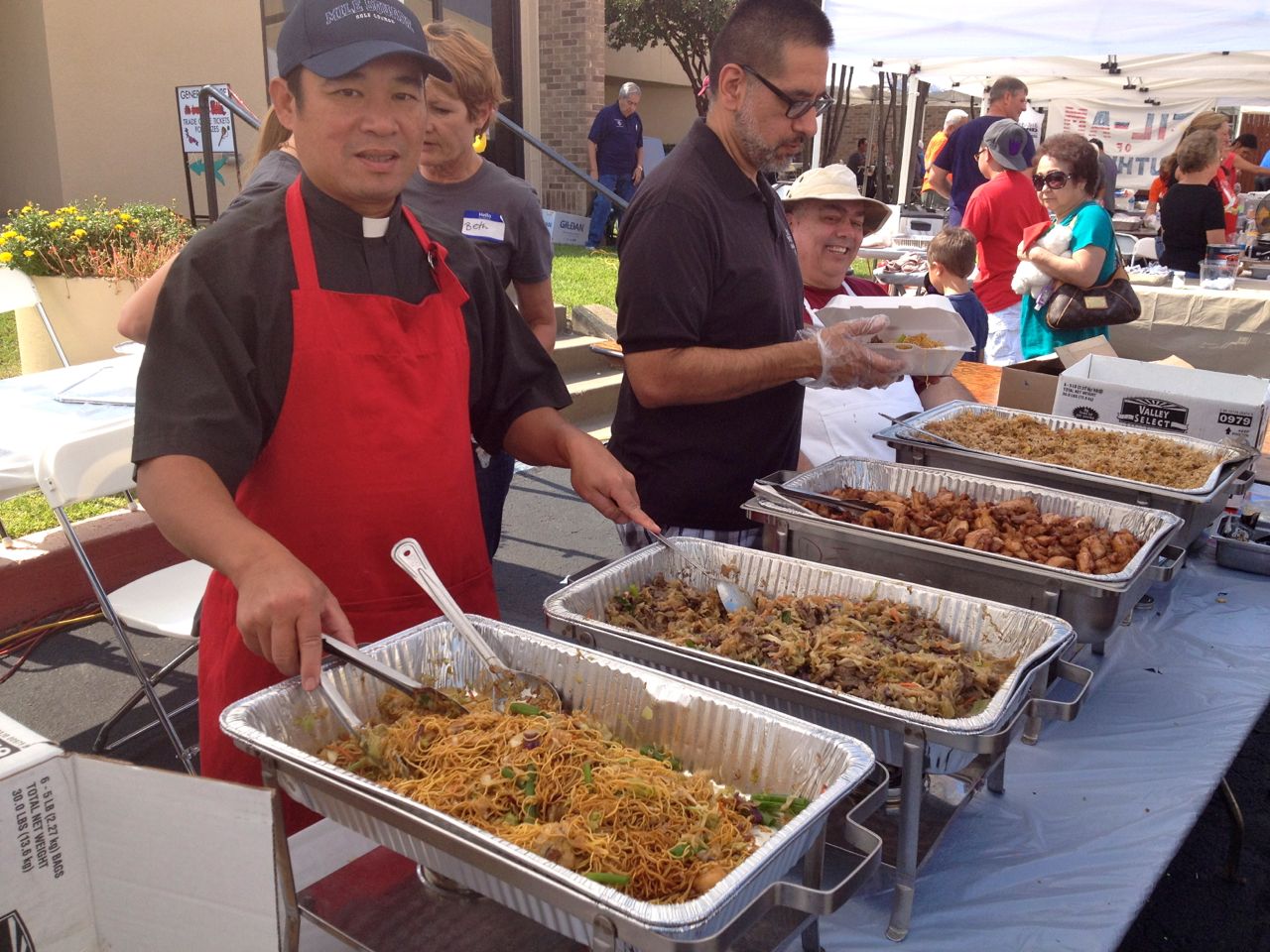 [dropcaps] A [/dropcaps] sk anyone if they can remember the last time we had two gorgeous sunny days in a row during Holy Spirit’s Fall Festival and you’d have enough time to run and get a Funnel Cake before they could think of an answer. The fact is that it has rained for most of the day on the last Saturday in September for the last 100 years, well that may be a slight exaggeration, but at least as long as I can remember anyway. But no one was complaining, and certainly not the runners who signed up for the first ever 5K and 1 Mile fun run organized by the festival committee which took off at 7AM on Saturday morning from the west parking lot.

Devout rummage sale shoppers are usually there bright and early too, seeking to grab the best bargains as soon as the festival opens before anyone else does, they’re a real competitive bunch. But they know from experience that they can walk away with some unbelievable bargains and perhaps even some small treasures from our generous parishioners who have been donating their excess “stuff” since late spring. The Rummage Sale brings in over one third of the proceeds of the entire festival, with the Live & Silent Auctions bringing in another third and the Midway foods and games bringing in the rest. But the festival’s emphasis on Saturday is all about health, and the Health Fair in the narthex offers lots of free stuff, including Free Flu Shots, Free Blood Pressure, Blood Glucose, PSA Blood Screen, Body Mass Index (BMI) and Cholesterol Screening. There’s also Free vision screening, Foot exams and Chiropractic Screening; Free prostate cancer screening and Exams. Free Fun Safety and Health Activities for kids and Zumba Gold and Senior Yoga outside in front of the stage.

Meanwhile out on the Midway the children’s parade kicks off the fun for the kids and there are plenty of fun activities for the entire family too. The eastern part of the Midway is lined with a variety of fun games that this year featured a water balloon slingshot toss from inside one cage on one end to the other side. This was a really popular game in the afternoon when the temperature rose above 90 degrees and the kids did not mind being sprayed with a little cool water from the bursting balloons overhead. At the end of the east parking lot the ever popular petting zoo allowed children of all ages to mingle closely with farm animals like sheep, goats, piglets, donkey, ducks, chickens and calves.

Led by Grand Knight Nick Kleinhaus, the Knights of Columbus Council 8157 was there to cook for the hungry festival goers who feasted on our delicious smoked turkey legs, charcoal-grilled hamburgers, hot dogs and sausages-on-a-stick; not to mention the gigantic funnel cake portions with whipped cream and cherries on top that Dan Murphy and his crew were serving up right across the road from the grill.

This year the talk of the festival was undoubtedly Father Tuan’s Vietnamese-style food booth. The plate included fried rice, fried noodles with veggies, beef with veggies and sautéed chicken. Despite each serving being a complete delicious meal in itself, many of us still felt obliged to taste a bit of each of the other food booth offerings on the Midway. How could one keep away from the famous Fil-Am eggrolls or even the classic Texas corny dogs. Although by the time I got around to the pulled pork sandwich which was yummy, for a cold slice of watermelon, I did leave enough room in my tummy.

The live entertainment throughout the weekend truly highlighted some of our best local talent including our very own KofC Chancellor Tom Greco singing his railroad theme songs of the 20th century, classics all. Making their debut appearance at the festival was Strange Commodity, a three member band performing a mix of rock and contemporary songs that everyone could relate to. The entertainment lineup included the Bishop Dunne Drum Line; Gospel Praise singer Cathey J. Sparks and her son; musician songwriter Jed Marum; the Butch Walker Trio performing their mix of Rockabilly and rock and Roll; Behan with their festive toe-tappin’ Irish pub tunes; the Celtic music team Selkie Girls; and the Desmond Bunney’s Lonely Hearts Club Band performing Rock n Roll, Country, Folk, Celtic and popular dance tunes.

The grand event of the evening, the Silent & Live Auction/Dinner on Saturday night, chaired by Sandy Ciarochi, was emceed by the dashing red-jacketed magician-entertainer-auctioneer, Mr. David Hira, who once again inspired many of us to reach deep within our pockets and find a few extra hundred dollars that we did not need to take back home with us. Thanks to the untiring efforts of chefs Susan and Mike Fitzgerald, the guests dined on their fabulous recipe of beer-can turkey with seasoned roasted broccoli, garlic mashed potatoes and butternut squash, followed by a healthy serving of double chocolate brownie with raspberry and whipped cream!

Sunday after masses seemed so crowded there were human traffic jams on Festival Street as people frantically ran from one food booth line to another. The air was filled with excitement as children ran towards their favorite inflatable games with their parents in tow. The final event of the day was the Raffle which featured a VISA Gift Card worth $5,000; a $2500 Dream Vacation; a 55″ flat screen smart TV; an Apple iPad and 2 drawings for $250 gift cards.

With an efficiency reminiscent of a native American tribe packing up the village and trailing a herd of buffalo, almost immediately after the raffle ended, the right arm of the church a.k.a. the Knights of Columbus led by Operations Chair David Dybala went to work dismantling the tents, folding tables and stacking chairs and stored everything back in its rightful place. It’s hard to imagine that the set up work which took the Knights most of the day Thursday and Friday had been dismantled and put away in just over 3 hours. By the time I left about 7 PM Sunday, there were only a few distant pieces of litter blowing in the wind. But I’m sure I and my fellow Knights were left with many good memories and a certain sense of accomplishment.

A huge THANKS to all the Knights who participated in this herculean effort.