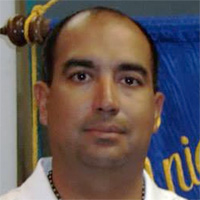 The seven-member Limones family were veritable season-ticket holders for the parish’s fish-fry dinners during Lent. “And the kids don’t even like fish,” Carlos noted. Plus, he chipped in as part of the council’s dinner work force, too. Carlos joined the council in June 2014. He’s a graduate of Duncanville High and is now a deputy sheriff for Dallas County, his employer for the past 18 years. Melisa works in network sales at NBC Universal Telemundo in Fort Worth. They will celebrate their 15th wedding anniversary in July. The five Limones children are Bibi (16 as of April 28), Andres (13), Laila (12), Elise (9) and Porfi (8). The Limones live in Cedar Hill.