You might be excited to know Mike and Susan are already planning the big Saturday dinner to be served during the next Fall Festival. They’ll be going with brisket and have already conducted a taste test of rubs, back in December.  They’ve become the first family of  Festival cooking, having previously provided chicken and then beer-can turkey (a Thanksgiving theme that including cornbread dressing, green beans and carrots). With Mike’s affinity for grilling, Susan gave him a literal big surprise for his birthday in 2011 – and smoker and trailer measuring 14 feet. (They brought it to the last Festival.) Mike’s strategy for preparing something like brisket is relatively simple: “Go slow.” For the December tasting at their Ovilla home on a Saturday night, he began by marinating on Thursday, started up the smoker on Friday afternoon and was done about 24 hours later. And, yes, he checked the fire’s progress every hour – even throughout the night. 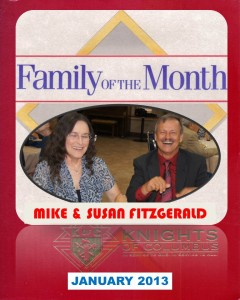 Mike joined the council in the late 1990’s and was our Knight of the Year in 2011. He works for the Allianz insurance company, underwriting ocean cargo policies. Susan is the librarian at DeSoto West Middle School. They have three grown children and seven grandchildren. The Fitzgeralds celebrated their 32nd anniversary in November. Mike didn’t cook; they went out for dinner.

Mike’s strategy for preparing something like brisket is relatively simple: “Go slow.”