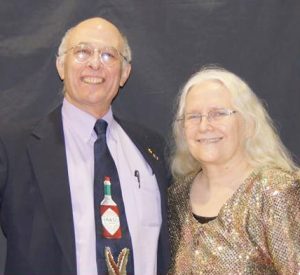 “Spirituality brought us together,” Tom Greco said of he and wife Helen Beggane, who recently celebrated their 38th anniversary with a quiet dinner and remembrances of how much they love each other. God apparently had a plan for Tom and Helen. They each started out in Baltimore but didn’t know each other. Each moved to Philadelphia but didn’t meet. Each wound up in Omaha, where they finally met and were married on April 19, 1975. They’ve been parishioners since July 1982. Tom joined the Knights in November 2007 (“November 13th,” he quickly added off the top of his head) at the suggestion of Bill Dover, then the council’s membership director. Small world: Tom is now 8157’s membership director, and Helen works for Bill, overseeing the good doctor’s insurance matters. Tom has spearheaded the council’s new Degree Team, which has brought 26 members into our council and 59 total into the Knights since last August. Tom and Helen have long been active in the choir that performs at 5:30 Mass, and he’s also a lector. Tom works for the City of Duncanville as a senior code enforcement officer. He’s serving his first year as the council warden and recently was one of our delegates to the state convention in Corpus Christi. Good at memorizing his part for the Degree Team, Tom recently joined Duncanville’s community theater along with Helen. Bravo. 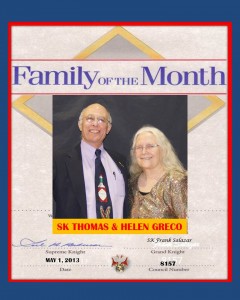