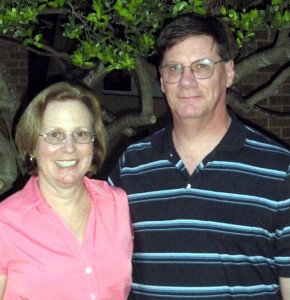 Frances and Jeff joined Holy Spirit Parish soon after they moved with their four young children to DeSoto from Jacksonville, Fla., late in 1987, when Jeff was hired by The Dallas Morning News. They met in the mid-1970s while attending Auburn University in Alabama and were married in 1978. Frances earned a nursing degree but spent a number of years as a stay-at-home mother while Kim, Jason, Kevin and Joseph were growing up. She returned to the medical profession in the mid-1990s and has been the administrator of an outpatient surgery center in north Dallas for the past 11 years. Jeff has spent most of his career in journalism, though he was Holy Spirit’s director of community life for about a year and a half in 2011-12. Jeff joined the Knights during the summer of 1997 at the invitation of then-Grand Knight Bill Chalko, a fellow band parent at Desoto High back then. Frances and Jeff are Eucharistic Ministers at the 11:30 Mass, and Jeff also helps with the outreach ministry’s Eucharistic Ministers for the Sick and Homebound on occasion – kind of coming out of the bullpen when Mary Flusche needs some fill-in help. Frances grew up in a Catholic home along with five sisters and a brother and attended Catholic schools through high school. Jeff converted just before they were married.