Marce Tebbe displayed a wide range of skills and interests during December and January alone. When the parish’s annual Breakfast with St. Nick was in need of a new St. Nick (Leo Mattingly was recovering from eye surgery), and Marce answered the call. He and wife Brenda have helped with the decorations, set-up and operations of the breakfast for years, so it was simply a different role. “I love interacting with children and had a wonderful time talking to about 200 that morning,” he said. (Hope he didn’t promise anybody a Red Ryder rifle; you’ll shoot your eye out, kid.) 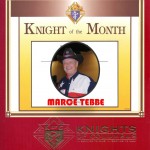 Marce has been the council’s director for Pro-Life activities and was busy in mid-January as usual with the annual events held in downtown Dallas in connection with Roe v. Wade, this year being the 40th anniversary of the Dallas court decision that legalized abortion in the United States. He and Brenda participated in the memorial Mass, march and rally. The Tebbes became active in Dallas diocesan Pro-Life functions soon after moving to north Texas in 1998, and Marce became secretary of the Hike for Life board of directors 10 years ago. “Support of the unborn has always been a passion of mine that I hope will continue to grow in others that we have touched,” he said.

Support of the unborn has always been a passion of mine that I hope will continue to grow in others that we have touched.