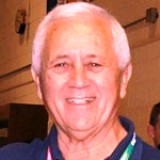 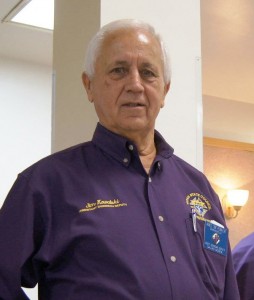 If you’re looking to judge the commitment to our order of Jim Kowalski, September’s Knight of the Month, simply check the man’s odometer. He’s usually on the road three or four nights a week fulfilling his duties as assistant diocesan deputy for membership. From Bonham south to Corsicana, Greenville west to Grand Prairie. “In six months’ time, I’ve visited all 52 councils,” Jim reported (while driving home from Ennis one night). He has been assistant diocesan deputy for two years and membership director for about five. Jim is a two-time Grand Knight at 8157 and Knight of the Year both here (in 1988) and at his original council, 3593 in Oak Cliff. He became a Knight in 1962 at the urging of his new father-in-law. Jim and wife Lillian met in 1960, at a Catholic singles function, and were married on Thanksgiving Day 1962. Why that specific date? He can’t recall: “I guess we were thankful,” he said with a laugh. They have three sons, one daughter and five grandchildren.

Jim, his sister and his mother boarded a train in 1949 in Milwaukee and moved to Dallas. He graduated from Forest Avenue High School in 1952 and then began his working career. His resume includes 11 years as a KC field agent. “I’ve been everything except a district deputy,” he said, “and that’s too much politics.”

By: Jorge Ruiz|Family Activities, Knight of the Month, Service Programs