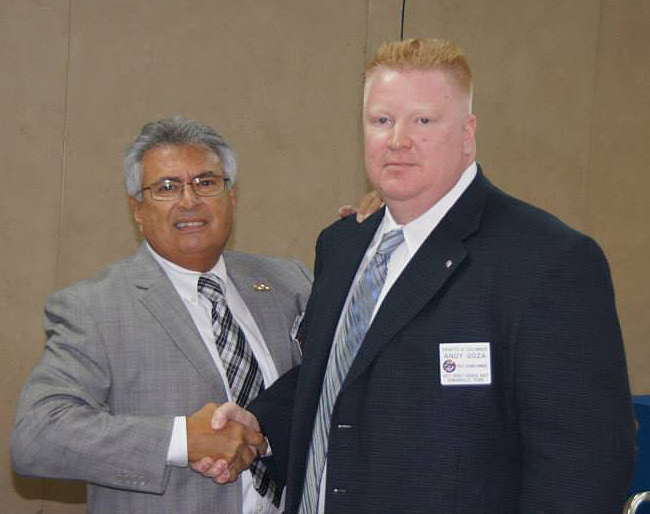 [dropcaps] T [/dropcaps] he 2012-13 fraternal year was an historic one for Council 8157, from A (Juan Acuna, Ivan Alonso) to Z (Sande Zander, Erasmo Zapata) in terms of adding new brothers to our membership. The council added 41 members, 27 of them recruited by Andy Goza. By meeting our quota of newcomers by more than 200 percent, the council was able to earn Double Star Council status from Supreme for the first time in its 31-year existence. And that goes a long way toward explaining why Andy was voted as the council’s 27th annual Knight of the Year, honored as such at the annual awards dinner that took place in the parish community center’s dining room as part of the third quarter Corporate Communion on Saturday night, Sept. 21.

In a departure from past introductions of the Knight of the Year winner, “emcee” Jim Kowalski actually asked the wife of the new Knight of the Year to step forward, and Andy’s wife, Susan, did so. “I thank you very much,” Andy said before he also congratulated the other two worthy finalists for the award, Tom Greco and Pat May. Andy received an engraved bowl from Grand Knight Frank Salazar.

Andy took his first degree in August 2008, his major degrees three months later and eventually added induction into the fourth degree. He wasted little time in becoming a council officer, filling the position of Chancellor for the 2009-10 fraternal year. He then served as Grand Knight in 2010-11 and ’11-12 and now is one of the council’s three trustees, director of council activities and is a member of the aforementioned degree team. Andy is present at most council activities, from Lenten fish fry dinners to pancake breakfasts to setting up for the Fall Festival.

Andy and Susan (a flight attendant for American Airlines) were married on June 17, 1989, which he didn’t realize then was the seventh anniversary of the founding of our council. Daughter Madison was born in 2004 and is a fifth grader at St. Elizabeth of Hungary Catholic School in Oak Cliff.

In making the Knight of the Year presentation, Jim recognized previous recipients who were in attendance: Ernie Coy, Leo Mattingly, Dan Murphy, Ed O’Brien, Allen Reitmeier, Frank Salazar (not to mention Jim himself). “These are the men that are responsible for getting us to where we are right now,” he said.

Also receiving certificates of appreciation were all of the officers, directors, degree team members and other brothers who serve on various committees.