Our first Knight in Shining Armor is La’Don Wright 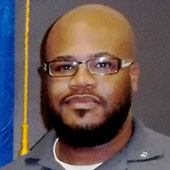 [dropcaps] W [/dropcaps] e are proud to announce that our council’s first “Shining Armor Award” has been earned by La’Don Wright.  La’Don not only met the criteria necessary for earning the award but has exceeded it by a mile. Since joining our council, La’Don has been actively attending monthly meetings, participated in several of our service program events and he recruited 4 new member Knights. He has become a tremendous asset to our council and his leadership, contagious enthusiasm and dependability inspire the confidence of his brother Knights, he’s been nominated to the officer post of “Inside Guard” for the 2014-2015 fraternal year.

Awarded for service to the Order with distinction during the first year of membership, the “Shining Armor Award” is given to those men that exemplify what a true Knight of Columbus is. The concept of the “Shining Armor Award” program is to get new members active in the many facets of the Knights of Columbus as early as possible and assist in maintaining that activity and also honor them as a valued member of our council.

To qualify for the “Shining Armor Award” new Duncanville Knights must during their first year of membership: