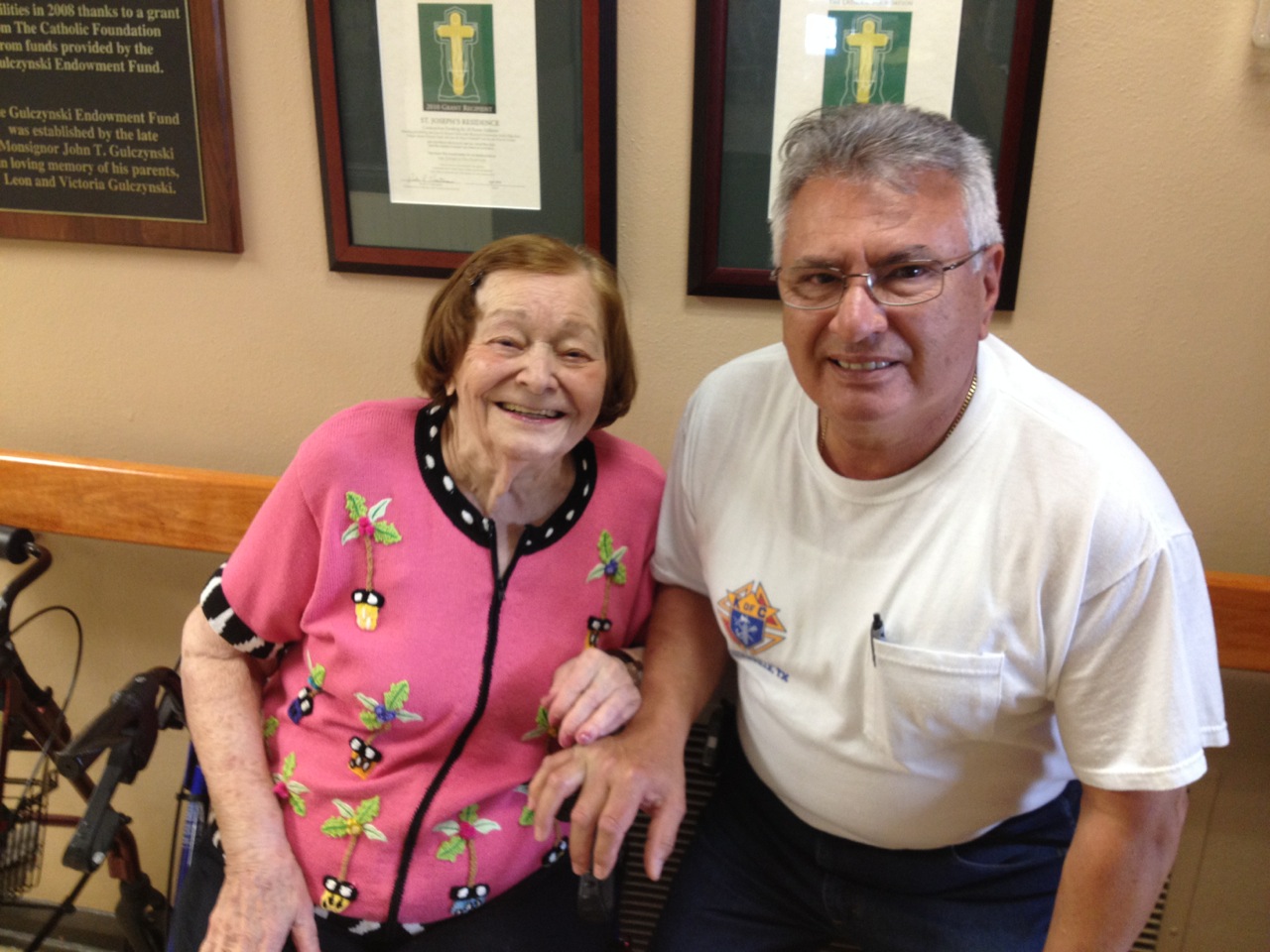 [dropcaps] A [/dropcaps] nother successful cookout for the residents of St. Joseph’s Residence took place this past Saturday, May 10th, 2014 by the Duncanville Knights of Columbus Council 8157. Of all our charity events this is always one of the most rewarding. Our goal is to bring a little bit of comfort to the elderly residents who seem to delight in our food and our company alike. On this day a vivacious resident named Eliza was celebrating her 91st birthday and much to her delight we all joined in to sing her the birthday song.

Eagerly awaiting lunch and sitting with her walker to one side was Mrs. Eleanor McCaskill, 85, a 5–year resident of St. Joseph’s and Holy Spirit parishioner. Eleanor expressed her deep sadness about being alone since her husband Bill passed away and from living away from home. She had fallen a few days before and wore a bandage over her left eye. She spoke fondly about her children and was looking forward to her Mother’s Day picnic at Joe Pool Lake with her son and family the next day.

Irma Gualy, 93, a highly spirited 6 1/2–year resident of St. Joseph’s couldn’t wait to have someone listen to her stories about her upbringing and successful adult children. Hard of hearing and almost blind, she identified her biggest fear as being the loss of memories and yet she managed to recall vivid details of her family and life in Colombia, South America and told them with such enthusiasm that one could not help but be charmed by her. She spoke clearly and loudly in perfect Spanish and said she was of German descent and spoke fluent German as well.

Visiting the residence today and spending time with 91-year-old Eliza (the birthday girl) was volunteer Maria Torres and her 4 young children. Maria said she came one day to visit a friend and will never forget how she was “moved” by Jenny, a resident who begged her to return to visit her again. Now she makes frequent visits to the residence and plans on starting a Knitting Group for the residents.

Keeping up with the daily chores of running the residence’s kitchen for the last 5 years is no easy task for Gloria Pereira. Gloria is one of nine full-time employees at the residence whose main responsibility is keeping the kitchen open for business. Gloria came to Dallas, Texas from Mexico City via California where she met her husband when she was 21 years old. Gloria recalled the hardships they had to endure before she and her husband became American citizens and the struggles with living separated by country borders at times while raising their young children. After many years working in construction, her husband is now disabled from a work-related injury and Gloria has to help provide for her family. Today Gloria and her husband are the proud parents of three successful adult children.

St. Joseph’s Residence mission is to provide care to the elderly who can no longer live alone and to help those in the final stage of their lives draw closer to God. Their focus is on wellness, dignity, and independence of residents in a caring, Catholic community. It is run by the Bethlemite Sisters, Daughters of the Sacred Heart of Jesus, which arose from the Bethlemite Order, begun in Guatemala in 1658 and now based in Bogota, Colombia.

Our council was well represented with the following Knights in attendance: