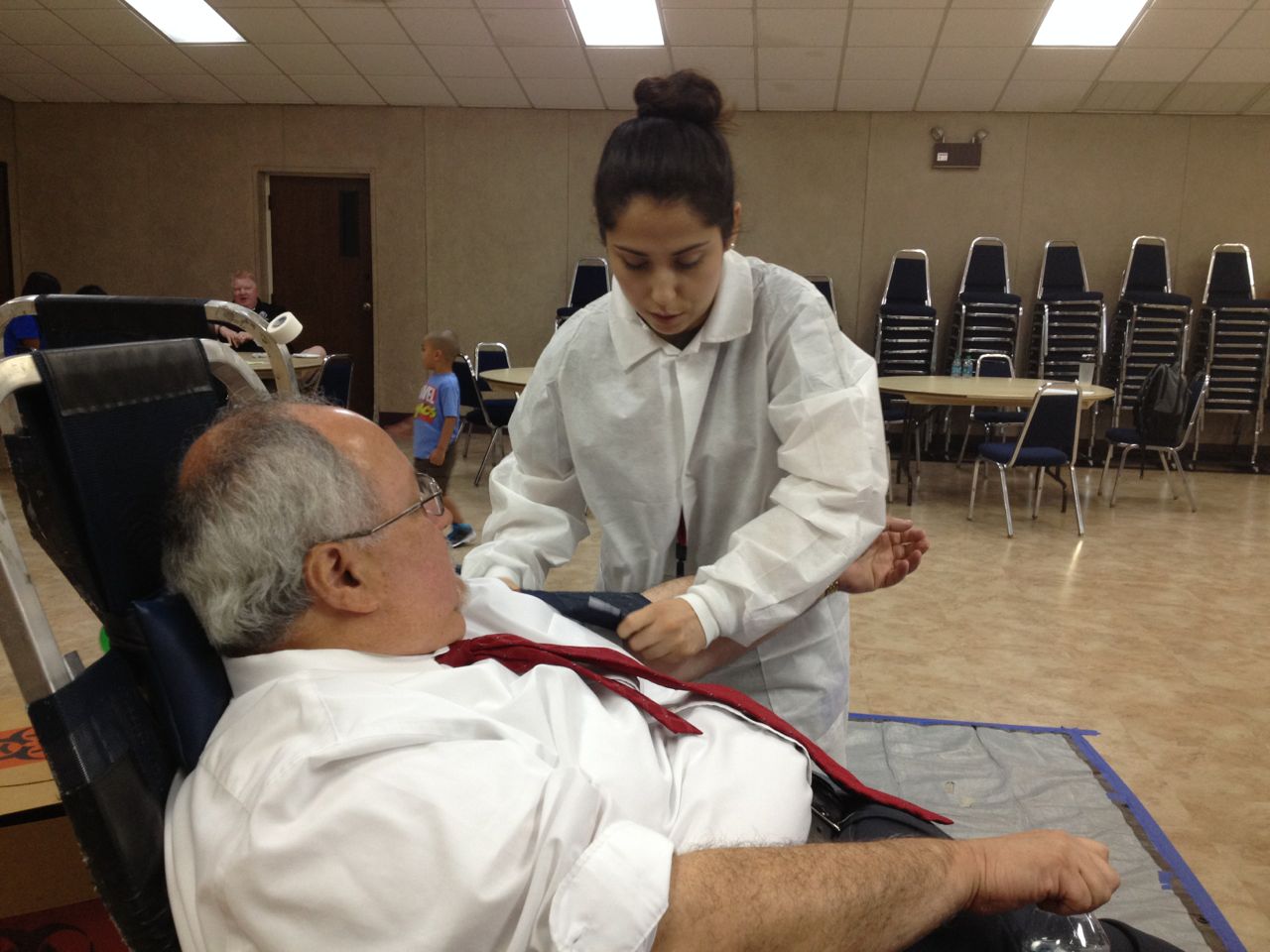 [dropcaps] O [/dropcaps] ur summer blood drive this past Sunday, August 17th turned out to be quite successful despite the threat of inclement weather. Not only did we have a record turnout of just under 40 donors, we also had 2 of the youngest donors in our blood drives ever, two 16 year-old girls.

Accompanied by her entire family, 16 year old Lissette Torreblanca, a Junior this fall at Duncanville High School donated blood for her first time ever. Her father Alberto, a craftsman cabinet maker and supervisor for a custom cabinet manufacturer in Dallas, joined her in donating blood today. Lissette’s mom, Marlene who works for the city of Irving’s Fire Department waited patiently with her younger brother Eric (11) and sister Sofia (7), both of whom attend Faith Formation at Holy Spirit. The family joined our parish in 2011 and Lissette has been a member of the Youth group for about 2 years. Lissette discovered her passion for tennis at 13 and now plays on the Duncnaville HS Tennis team; she wants to major in Psychology in college.

Sarah Craven’s youngest sister Ruth had to be hospitalized at Children’s Hospital at the tender age of 5 weeks and needed blood during her treatment, something Sarah recalls as having impacted her greatly and inspired her to walk in today, on her 16th birthday, to give blood for her very first time ever. Andy Goza led the entire room full in singing a hearty version of the birthday song, much to their delight. Sarah is the sixth of ten children of longtime Duncanville residents Fred and Susan Craven. After having been home schooled through the 8th grade, she now attends Duncanville High School, where she apparently has made a smooth transition into public school life. Part of her extra-curricular activities include being president of Future Farmers of America (FFA) and she participates in Academic Decathlon–competitive testing. Her goal is to attend the University of Dallas and major in English and eventually become a teacher.

Miguel and Darlene Hernandez came in to give blood today after Mass, accompanied by their two highly spirited young boys, David (4) and Benjamin (2.5). Having come from the St Cecilia parish only a couple of months ago the young family already appears very comfortable in their new surroundings and seems ready and willing to take on a more active role in their community. Miguel is a Probation Officer with the city of Dallas in one of the most challenging criminal justice units of the department, where he supervises a caseload of 15-20 offenders. Darlene is no stranger to work stress either as a Property Manager at a local storage facility by day and full time mom by night.

Being there for his sister is important to Jesus Zamora, a 28 year old 3rd grade teacher and IT professional who accompanied his sister Luz Perez, a banker at Valley Ranch and mother of two, to give blood today after Mass. An articulate and introspective young man, Jesus expressed his need to do meaningful work for himself and his community. Their mutual support and respect for each other is obvious and refreshing and we hope to see a lot more of these bright young people in our community.

There were dozens of other blood donors today whose noble act may go unmentioned but not unrecognized and certainly not unappreciated. So we thank you all for heeding the call. God bless you!