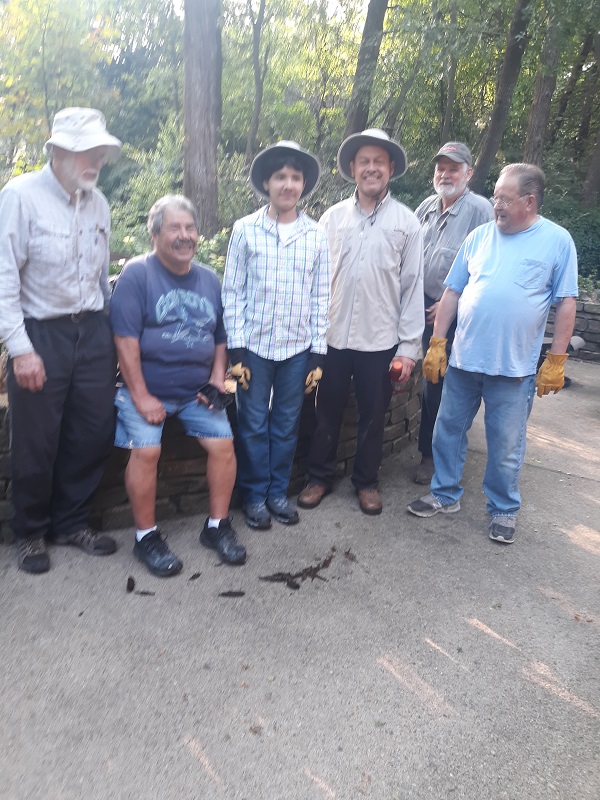 On Saturday September 19, 2020, John Espree and his grandson Jeremiah, David Dybala, Ray Rivera, Jim Ouimet, Larry Balagna, and I tried to do some landscaping work and fence repair at the home of Gabby Hardin whose house is located in Duncanville.  I say tried because while unloading 4” X 4” posts, we accidently disturbed a nest of bees.  Ray Rivera and I were stung numerous times (15 – 20 stings each) before we were able to escape.  These guys were really mad, I’ll tell you!  So we settled for doing the landscaping job by replacing 21 rotten landscape pieces on one side of her house.

The bees didn’t bother us there even though they we were fairly close to their nest in the ground.  There was lots of speculation about what kind of bees they were.  Ray and I didn’t really care; we just knew the stings hurt and later we were both sullen up in numerous places.  We were finished by 9:30am after starting at 8:00am.  We’ll go back once the bees have been removed and finish the job.  Gabby was very happy to see us and pleased with the work we did.  She was apologetic about the bees but she had no way to know they were there- she got stung as well.  Thanks guys for your effort.

So on Saturday October 3rd, Larry Balagna, Jack Ramsden, Eric Conner, and David Ybarra went back and finished the job. We installed new landscape timbers for another section of wall and replaced the broken posts on a decorative fence in the front yard. All went well as it appeared that the bees were either gone or sleeping. So now the job is done. Thanks guys.