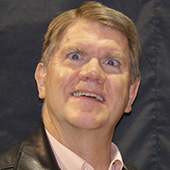 This past March marked the 40th anniversary of Steve’s entry into the Knights of Columbus. That took place in Council 4118 in his native Kansas. Steve was convinced to join the KC’s by those around him at Bishop Carroll High in Wichita, where he was a math teacher. Steve graduated from what’s now Emporia State University in December 1974, weeks after he and Linda were married over Thanksgiving weekend. The Reids came to north Texas (and specifically Duncanville) in the final days of 1985 just before Steve, who’d left teaching to do aerospace analysis, was hired by LTV in Grand Prairie. The Reids have three grown sons – for years we saw Steve in his Boy Scout troop leader uniform – three granddaughters and two grandsons. With retirement last September, Steve has more time for service; we saw him happily greeting diners on the serving line for the Lenten fish fries and he has helped since January at Holy Spirit’s food pantry twice a week. He notes that demand at the latter has nearly doubled during the current pandemic. Beginning in July, Steve will be our Outside Guard.

By: Jeff Miller|Knight of the Month, News & Announcements, Uncategorized