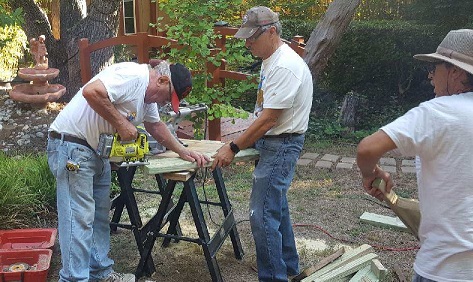 Nel Mancenido wondered how Knight Hands could possibly remove all the rotted lumber from his gazebo deck and replace the rotted portions with new treated 2” X 6”’s in such a short period of time.  Here’s how we did it.  David Dybala had surveyed the damaged deck beforehand and determined the necessary materials to complete the job (we used every piece) and Allen Reitmeier bought the materials and brought enough tools to do the job. 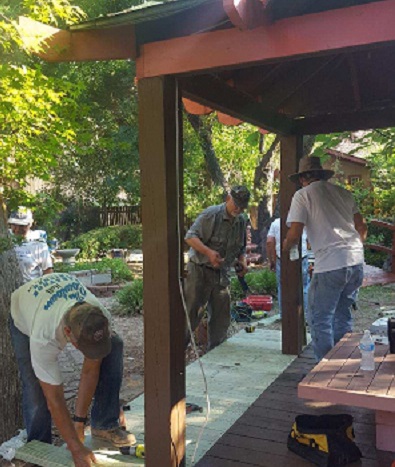 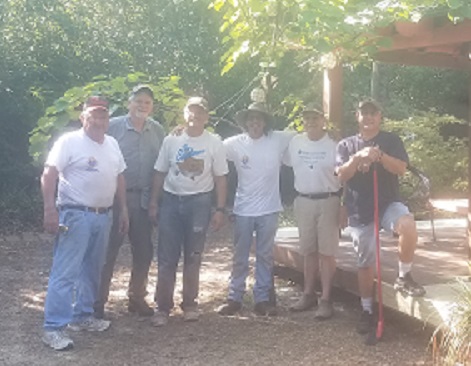 Mike Fitzgerald, Hector Rubio, Efrain Ochoa, and Arthur Rodriguez jumped right in and removed the old rotted sections and prepared the surfaces for the new material.  Battery powered drills were “humming” in a number of places at the same time, while the cut-off saw was in constant use.  We stated the project about 7am and although we were not in a hurry; we certainly wanted to beat the heat of the day.  We finished the project in about 3 hours   – actually at total of 18 man/hr.  Everyone stayed hydrated with coffee provided by Nel and Cora and water and Gatorade provided by Allen.  Not a harsh word was heard as these 6 Knights of Columbus fulfilled one of our mission; to help those in needs in our parish community.  Just as a side note, this was the 279th project completed since the advent of Knight Hands in 2010.  It is a tribute to the men who give of their time and skills to help wherever and whenever Knight Hands are called upon.  You guys are to be congratulated.  Nel and Cora were most appreciative of the effort you guys expended while completing this project.  The improved deck looks awesome.