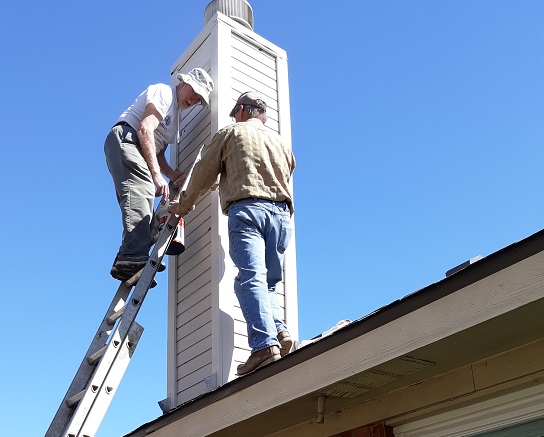 Starting in March 2017, this Council has participated in the P.I.P program sponsored by the Vitality Commission of the City of Duncanville and coordinated by the First United Methodist Church of Duncanville.  Each spring and fall residents of Duncanville are offered the opportunity to submit an application to the City of Duncanville for assistance to improve their home or home site.  In March of 2017 and in September of 2017 and in May 2018 and in October 2018, Knight Hands was always assigned the task of repairing/replacing back yard fencing.  This year Knight Hands was given a choice of home to improve.  The project chosen by Dan Murphy and myself was located at 810 Astaire Ave in Duncanville and it involved removing, replacing, and painting the rotted fireplace chimney wall trim pieces and replacing two short sections of fencing on either side of Helen Frison’s home.  But even before we started working on this project, Betty Dunn, coordinator for the United Methodist Church, asked Knight Hands if we could possibly repair a hole in the roof and replace a bunch of missing shingles on the home of Carmen Spencer located at 1235 Elsmere in Duncanville.  On April 15thMike Fitzgerald Larry Balagna, Jack Ramsden completed this job in about 13 man/hours.  Thanks you guys

On April 26, Ken Rarick, David Dybala, Jack Ramsden, Mike Fitzgerald, Hector Rubio and I tackled to job at 810 Astaire Ave.  Everyone arrived at 8:00am and hit the ground running.  Jack and Mike replaced the short section of fence on one side of the home while David and Ken tackled the much more complicated task of replacing the fence on the other side of the home which including a lot of engineering and  building a new gate.

While this was going on, Hector and Larry were busy on the roof top tearing off the old trim pieces (8 of them) and fitting new trim pieces and then painting the whole affair.  Mike helped with the caulking and painting of the trim pieces – Jack left to deliver Meals on Wheels.  We were finished by 11:15am much to the amazement of the extremely grateful homeowner.  Thank you guys for another job well done – this was project #316 and none could have been done without the efforts of the dedicated and knowledgeable members of Knight Hands.