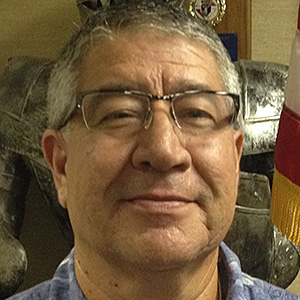 Efrain quietly goes about his work as a weekly volunteer during our Cedar Hill baseball concession stand operations as a member of the Monday night shift. He went above and beyond during this summer’s multiple World Series, not only stepping up to work multiple shifts on short/no notice but also preparing 47 pounds of brisket. “I like the camaraderie and helping out people,” he said. Efrain joined the council in November 2001 and took his major degrees in January 2002. He and wife Lisa have been married 21½ years and live in Ovilla. They have two sons, Carlos (20) and Nicholas (16). Efrain is from the Rio Grande Valley town of Pharr and graduated from the University of Texas-Pan American. He was looking to leave the Valley in 1979, moved to the Dallas area where his sister was and applied for various jobs. Efrain landed a job with the City of Dallas and stayed there for 37 years, retiring recently from his position in water engineering. Instead of a gold watch, he received a gold clock – and a street sign with his name on it! Lisa works at the front desk at The Home Depot in Waxahachie.