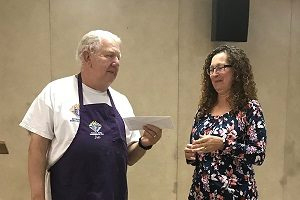 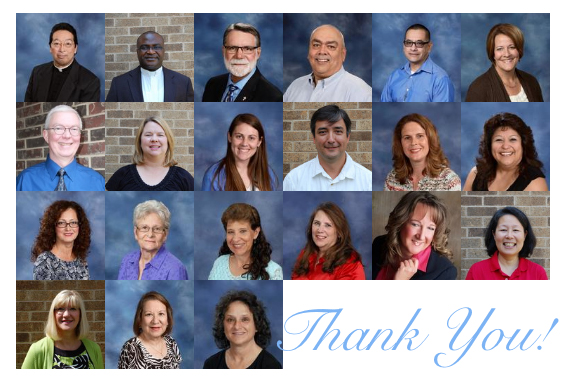 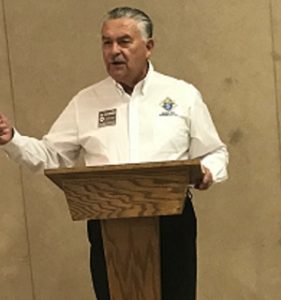 About a dozen Knights participated in the council’s first appreciation luncheon for Holy Spirit’s parish staff on Wednesday, Oct. 24. The luncheon was the brainchild of our director of church activities, Jim Stavinoha. Fr. Joe Lee and Fr. Eugene Okoli and most of the parish staffers were treated to a luncheon of roast beef, chicken, twice-baked potatoes, multiple vegetables, salad (in edible bowls that Jim made), banana pudding and peach cobbler.

Jim Richardson spoke to the luncheon guests and explained the mission of the Knights and detailed many of the impressive accomplishments, of both the Order worldwide and what has been done here at Council 8157 for years. 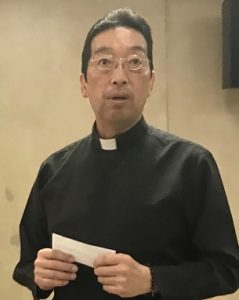 One of our council’s annual practices has been to make donations to the parish, earmarked for the various ministries. That has typically been done in a small meeting involving a couple of parish employees and no more than a handful of 8157 representatives. The establishment of the luncheon made possible the opportunity to present the 2017-18 donation check in a more public setting, which Jim Richardson did in make the presentation to Fr. Joe. 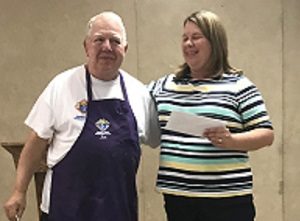 But there were other presentations to make, by Jim Stavinoha. He told Cindy Meyer, director of community life, that the council would follow up on paying the expenses for the 2017 parish Pentecost picnic, which doubles as Holy Spirits’ anniversary date, by footing the bill again in 2018. Jim then told Deborah Pearson, director of the parish’s youth faith formation ministry, that the council would pay the tuition of 100 Vacation Bible School students and would also pay for their VBS t-shirts.