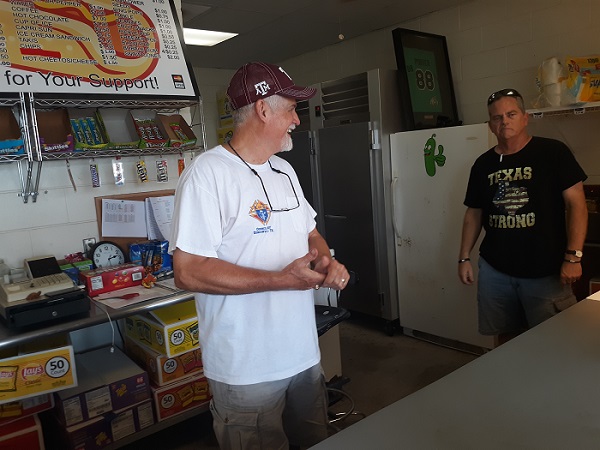 The Youth Football Cedar Hill league football season started on August 31 and will conclude on October 19 (barring a payoff tournament) This league plays either 4 or 8 games every Saturday starting at 9:00am and are completed about 4:00pm. The youth teams are 6, 8, 10, and 12 years old. Some of the teams come from as far away as Waco. In addition to these league games each Saturday we have had two tournaments – one by FlagfootballX and one by RiseupflagfootballX. On Sunday afternoons from 3:00pm until about 7:00pm we serve concessions for the Red Oak adult football league (usually 7 games). The traffic for the league games has been way beyond our expectations while the traffic for the tournament games has been less.

Of course, a special thanks also to James Smith and Jeff MIller, who take of their time to properly stock the concession stand/stands with goods to sell. Currently we have the same menu and pricing as the football concessions stand. We are still selling hot dogs, Earl Campbell sausages, chopped brisket sandwiches (cooked by Efrain Ochoa), nachos, frito pies, french fries, sausage-on-a-stick (at football only), chicken sandwiches, chicken nuggets, snow cones and drinks, candy, chips, and snacks. We have served concessions at about 110 games through October 5th.

Fall little league baseball kicked off on September 7th and will conclude on October 12th. As always we were flooded with customers from the baseball fans at these little league games

Best Southwest Baseball (BSB) has games every Saturday starting at 9:00am and concluding about 4:00pm. Southwest Classic Baseball has games most every Thursday night and concluded their season on October 10th. As has been the case for the past 6 season, John Espree anchors the Saturday morning shift. The second shift just fell into place when Knights arrived.