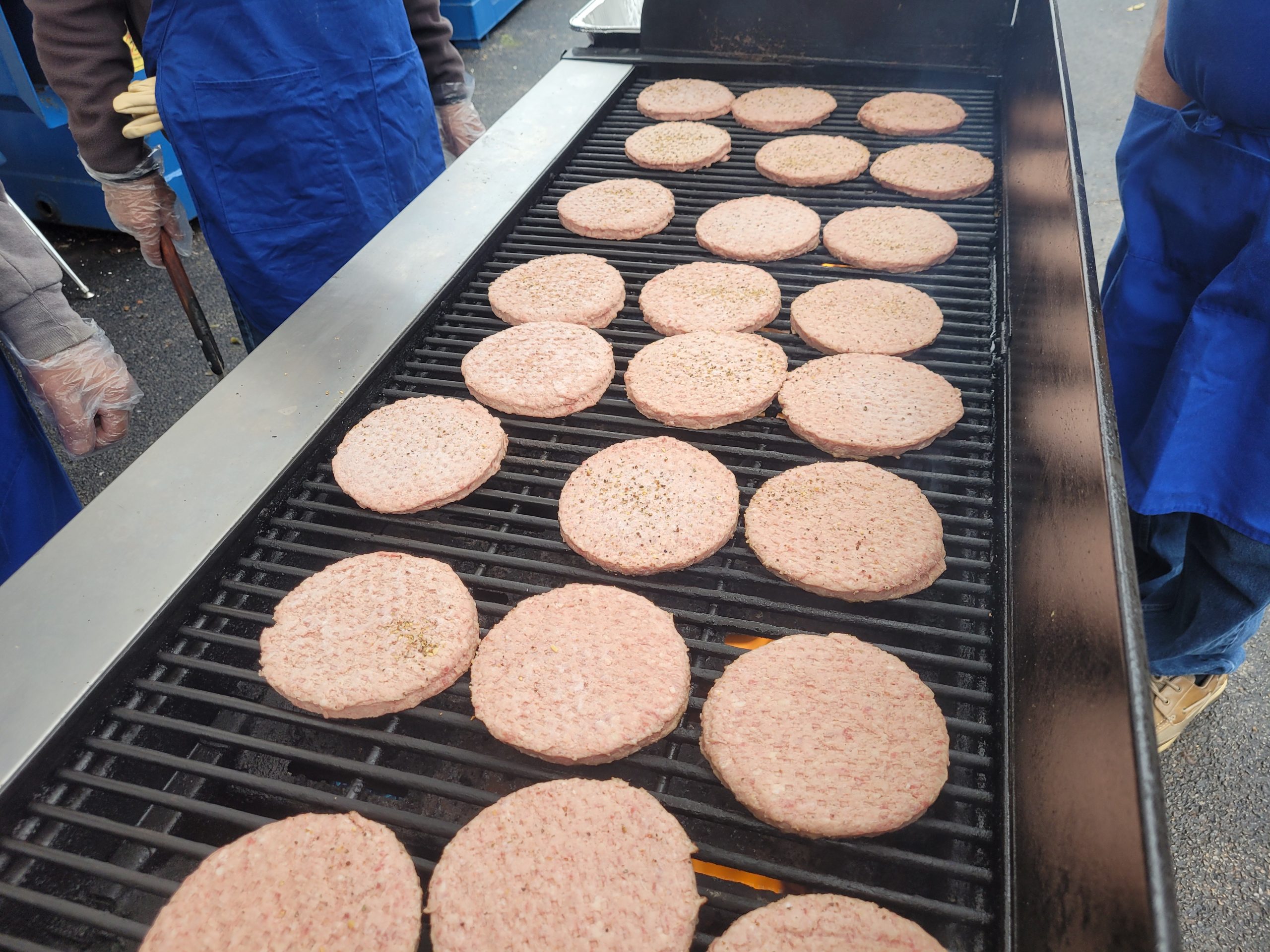 On a cool misty Saturday morning on the 29th of October , 2022 a large contingent of Knights gathered near the storage facilities behind the Community Center of Holy Spirit Catholic church.  Their mission was to gather and load all the necessary paraphilia and all the perishable goods needed to cook and serve the residents, staff, and guests at St. Joseph’s Assisted Living facility located at 330 West Pembroke Ave in Dallas.  It was pretty obvious that this was not the first time these Knight had prepared for this event – in fact this is a bi-annual affair.  So in no time at all the large grill was loaded along with tables, a tent and all the food stuffs including hot dogs, hamburgers, lettuce, onions, tomatoes, potato chip, and a whole lot of other essential items to make the cook-out a success.

Around 9:45am everyone made their way over to the St. Joseph’s Assisted Living facility and began preparation for the noon meals.  The grill was set up and fired up, the tent was erected, the tomatoes were sliced, the onions were peeled and sliced, the lettuce was washed and sized, the serving area was set up, the condiments were set out, the tea was brewed, and well you get the idea.

The impressive thing about all this preparation was how everybody seems to know exactly what to do and how best to do the tasks.   It just seemed so routine for so many of the Knights and their mates.

Quite some time before the dinner bell rang at exactly noon, many residents had already gathered in anticipation of this lunch being provided by their Knights of Columbus.  Deacon Al Evan led the group in a prayer of thanksgiving and then the meal was on.  The procedure was a bit different this year in that the staff and nuns and some of the Knights served the residence as they were seated in the dining room.  The trays and plates were filled by the serving Knights and wives.  All in all a very efficient and organized affair.  The fare was grilled Angus beef hamburgers, hot dogs, baked beans, chips, drinks, and cookies.  Of course the hamburgers and hot dogs could be accompanied by tomatoes, lettuce, onions pickles and other condiments.  The baked beans and cookies were prepared and delivered by Mike Fitzgerald whom I understand makes a habit of doing for these events.

One of our own long time Knights who is now a resident (Leo Mattingly) was most grateful and quite impressed by the loving care the Knights and wives showed in providing this meal.

This writer, too, was very impressed by the respect and care, and love these Knights and their wives displayed during this event.  Sheila Balagna provided entertainment with traditional piano tunes and it sounded like she was accompanied by singing voices, especially Mary Russell.  Throughout this entire event there was the constant sound of happy chatter among the Knights and the residents and the staff – a most enjoyable event by all measures.

This was all made possible by the kind hearts and willing hands of the following Knights or Knight wives:

A Special “thank you” to Dan Murphy, our Director of Community Activities, for organizing and supervising the entire event.  Although the work went on smoothly without much direction from Dan, “someone has to drive the train”.  Thanks also to Sister Carolina, the “top nun” of the St. Joseph facility, for allowing the Knights to display their caring attitude and loving hearts to the residents and guests and for organizing the staff to make this event memorable to the residents.